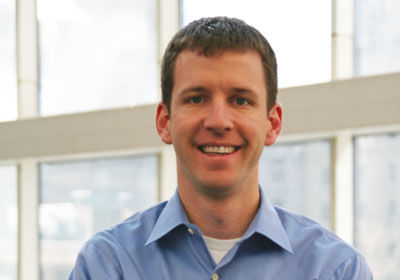 GovDelivery has found a niche helping its public sector clients connect with their "customers."
February 11, 2013

GovDelivery is all about growth. The St. Paul startup now has more than 550 clients, ranging from the city of Eden Prairie to the Centers for Disease Control and the United Kingdom’s Parliament. To make room for a growing workforce—GovDelivery has hired at least 30 workers in each of the last two years—the company expanded its headquarters in the Hamm Building by a third in fall 2012. The digital communication management company now numbers more than 100 employees—about 80 in St. Paul, and the rest in its offices in Washington, D.C., and London.

CEO and Cofounder Scott Burns sees the company’s Midwest location as a competitive advantage. “Our ability to keep our best people year in and year out exceeds tech companies on the coast—not only do people in Minnesota make long-term commitments with their careers, but St. Paul is a hub of education,” says Burns, noting that the city ranks second in the nation in educational institutions per capita.

Competing against the Twin Cities’ many Fortune 500 companies for talent has its challenges. “Corporate titans provide, for the most part, very stable employment,” notes Burns, while GovDelivery offers something different. “We have to identify the people that want this type of high-growth, risk-taking experience—[the] bottom line here is if you’re not making an impact, we don’t keep you on the team.” The upside? “People here are making a great impact.”

The company started small in 1999, with a venture called GovDocs run out of Burns’ basement. In 2001, he and cofounders Zach Stabenow and Dave Sommerness (now CFO) launched GovDelivery, seeing an opportunity to develop software that would provide government with the ability to communicate directly and effectively with citizens. Working mainly with the City of St. Paul and surrounding counties, GovDelivery survived the dot-com bust and reached $1 million in revenue two years later. In 2004, the company added federal and U.K. clients.

In January 2010, GovDelivery management positioned itself for faster growth by partnering with Internet Capital Group (ICG) to buy out the company, including 100 early-stage investors. Since 2009, GovDelivery has completed two acquisitions: the first, GovLoop, is a LinkedIn-meets-Facebook-style social network for government professionals, with 60,000 members. GovInteract, which the company acquired last January, will boost the company’s emergency communications capacity. GovDelivery also hosts annual government digital-communications conferences for emerging leaders in Washington, D.C., and London. This fall, the company landed its largest U.K. contract to date, providing its communications software for a section of the Cabinet Office’s gov.uk website. In 2011, GovDelivery had revenue of $13 million, and as 2012 drew to a close, the company was on pace for a 35 percent increase in revenue, Burns said.

A Duluth native, Burns says that GovDelivery focuses on what drives real value for its customers, “which is reach, efficiency, management, and engagement.” It’s a model taken from marketing. If you buy a CD on Amazon, for example, the website connects you to other items you might be interested in. Burns describes similar opportunities in the public sector. When citizens sign up for e-mailed snow emergency notices from their city, the website should also suggest other topics residents might subscribe to, Burns says. “If you have a snow emergency notification sent out and it looks nice, that is not worth as much as adding 1,000 new [e-mail] subscribers.”

After switching to GovDelivery, the Minnesota Department of Natural Resources has doubled its subscribers in just a year, says Jed Becher, the DNR’s web coordinator. In 2011, the department had 21,000 subscribed e-mail addresses for 20 topics using MailMan, another internal list-serve product. Now the DNR has 70 topics for 42,000 subscribers. “Financially, [GovDelivery] is the best choice,” says Becher, “and it was attractive that they only deal with government clients.”

Burns still considers the U.S. Postal Service one of GovDelivery’s biggest rivals. Large organizations with inertia, he explains, have a harder time changing the way they typically conduct communication. Yet as government budgets tighten, such organizations have to invest in new ways of doing business, such as cutting down on paper communication. Part of what makes GovDelivery so successful—with a 97 percent renewal rate—is the company’s wide range of capabilities for offices big and small. “We are more automated [and] familiar with government compliance in terms of archiving and reporting, and we are able to make information accessible to those with disabilities,” says Burns.

After more than a decade of partnering with the public sector, Burns is well aware of its limitations. “Government struggles at times to embrace the newest technology, compared to the private sector,” he says. But with experience has come respect. “Government is more complicated than the private sector,” Burns says. “People don’t think of it that way. That’s the empathy we come to the table with.”