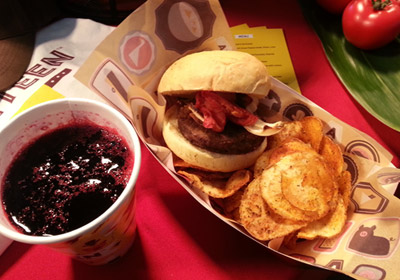 Fish and chips, spaghetti sandwiches, and a burger made with a blend of lamb and goat meat are among the new food offerings available at Target Field this year.

The Minnesota Twins, along with its concessions and retail partner Delaware North Sportservice, on Thursday revealed a list of new culinary options to be offered at the ballpark during the upcoming season. And much like last year, the emphasis is on local offerings.

Celebrity chef and Bizarre Foods host Andrew Zimmern will debut menu items from his AZ Canteen food truck concept, which he launched last year at the Minnesota State Fair. AZ Canteen will be located in section 120 at the ballpark and, among other items, it will serve the Canteen Burger, which is made with a lamb and goat blend and is served with house-made chips. It costs $13.

(To read an in-depth story from the February issue of Twin Cities Business about Zimmern’s career and growing business empire, click here.)

Also from St. Paul comes menu options from Panino’s Baked Sandwiches. The sandwiches, which will be sold throughout the park at Frankie V’s concession stands for $9, include a Buffalo Chicken Panino—made with chicken, celery, Swiss cheese, and buffalo sauce—and the Spaghetti Pie Panino, which is stuffed with spaghetti noodles, meatballs, and mozzarella cheese, and is smothered in pasta sauce.

While many ballpark visitors flock to hometown favorite Kramarczuk’s, there is a new local sausage offering debuting at Target Field this year. Italian and Polish sausages, as well as bratwurst and cheddar bratwurst, from Alexandria-based Sheboygan Sausage Company will be available at several concession stands for $5.50.

A trio of macaroni and cheese options that were created by the Food Network will also join this year’s lineup: buffalo chicken, jalapeno popper, and cajun andouille, which is made with Kramarczuk’s sausage. Papa John’s Pizza will offer personal pizzas, and fresh, locally-grown produce will be available at the ballpark on weekends starting June 1. Another new concept being introduced this year is the Twins Territory Market in section 112, which the team says will feature healthier menu items geared toward those with special dietary needs or food allergies.

Target Field’s restaurants and suites will also receive menu upgrades. For example, at Hrbek’s, fans will be able to find fish tacos and a homemade meatloaf sandwich; at Town Ball Tavern, a French dip sandwich and Summit beer-battered walleye fingers; and at the Metropolitan Club, sesame chicken bahn mi and a smoked turkey and brie sandwich, among other new items.

The new offerings will be available starting April 1—which marks the first time the Twins will open their season at Target Field since moving to the ballpark in 2010.

Likewise, locally produced beverages will still be on hand, including 2 Gingers Irish Whiskey and beers from Surly, Fulton, Summit, Finnegans, and Schell’s, among others.

A Twins spokesman said Thursday that “no major food items were dropped this year,” although the walleye in the State Fair concession stand was swapped out for Mac's Fish and Chips, and turkey legs are no longer for sale.

“The Twins will continue to make food and beverage offerings a top priority to enhance the overall game day experience at Target Field,” Twins President Dave St. Peter said in a statement. “The high quality products, local favorites, and unparalleled selection have played a significant role in making Target Field one of America’s greatest sports venues.”