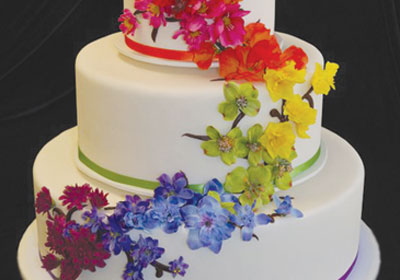 Is the same-sex wedding business a huge new market or a small blip on the radar?
August 05, 2013

Beginning August 1, same-sex couples can marry in Minnesota. The local wedding industry is well aware. David Mess, owner of Buttercream Bakery, saw an immediate upswing in same-sex customers, with 12 tastings in the first two weeks following the legislative vote in May, compared with an average of two tastings a month.

According to estimates by the Williams Institute, a think tank based at UCLA, the state of Minnesota will see a $42 million increase in spending from same-sex unions over the next three years, which includes $28 million from new wedding spending and $14 million in tourism expenditure from out-of-town guests.

The 2010 U.S. Census reports that 10,207 same-sex couples live in Minnesota. Of those, 50 percent will be issued marriage licenses within the first three years of the marriage equality vote, based on a pattern seen in Massachusetts and other states that legalized those unions. But after this surge, a state government estimate expects same-sex marriages to drop to a mere 150 per year—hardly enough to justify adding another cupcake oven.

With half of the entire market marrying in the first three years, vendors will have a very short window to take advantage of the gold rush, and will need the right tools to do it.

Bernadette Coveney Smith, founder of 14 Stories, the first firm in the nation to specialize in planning state-sanctioned same-sex weddings, teaches workshops for wedding professionals on how to approach same-sex clients. She says vendors need to be aware of subtle adjustments they can make to ensure that their new clientele is comfortable.

“It’s in the language, photos, and testimonials,” says Smith. “Anything in contracts or a website should be gender-neutral. If your website has a photo of a bride and groom dancing, that’s very traditional. I might suggest a photo of a bride dancing by herself or a groom by himself; are they marrying a woman or a man? It’s left up to the audience to interpret.”

The key is in the details, she adds. “Sure, some same-sex couples might not care if the forms strictly ask for the ‘groom’s name’ and the ‘bride’s name,’ but changing the language is simple and can help avoid an expensive mistake.”