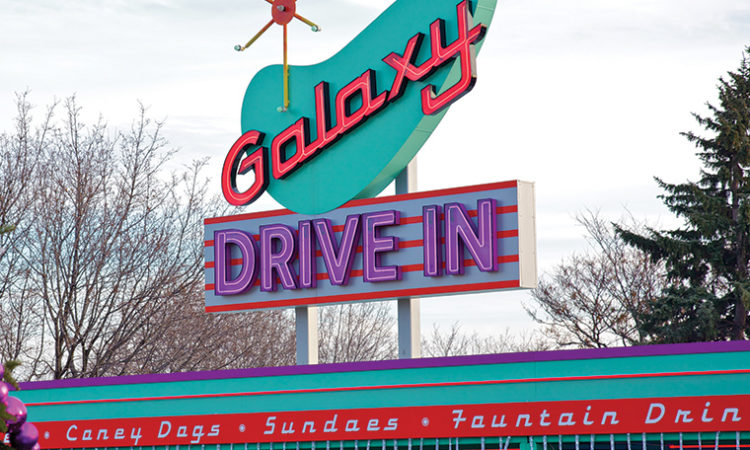 After years of searching, Owner Steven Schussler taps local bank chairman and restaurant owner as the space-themed drive-in's operator.
By Tess Allen
May 07, 2020

Editor’s Note: Clays Galaxy Drive-in reopened Monday, June 15. Apparently, the public was hungry for it: customers report they sold out of some items.

“To see the chairman of the board of a bank in his knee pads taking up floor at Galaxy Drive-In is a sight to see,” says Galaxy creator Steve Schussler, who has been working tirelessly to find an ideal operator for Galaxy since he created it back in 2009.

Over the last 11 years, Schussler has spent more than $100,000 a year maintaining the property—even while it wasn’t open. He’s also flown through a series of operators. None, he says, could deliver quality food at acceptable speed. Saliterman says the restaurant’s unique niche attracted him. He and Schussler were acquaintances—they have the same fitness trainer—so earlier this year, he called Schussler with “a very, very fair, comprehensive agreement,” Schussler says.

“They’ve got the means; they’ve got the ability; and they’ve got huge exposure,” Schussler says. “I feel really blessed that Mark and I have the same philosophy about good, quality food and service—and fun.”

Saliterman is updating the kitchen—“nobody told [Schussler] that the reason his hamburgers tasted bad was because they were being cooked on a flat grill,” Saliterman asserts—and looking into the possibility of adding an enclosed patio so that the seasonal restaurant can operate year-round. He’ll also have a Clays food truck on site, likely serving up cheese curds and mini-donuts.

The menu will get an update as well. “We’ll have hot dogs, hamburgers, ice cream, malts, onion rings, pizza by the slice,” Saliterman says. “And free vanilla ice cream cones for dogs,” Schussler adds. “And everything will be made from scratch.”

While Saliterman had hoped to open this spring, he’s faced difficulty getting a city health inspector on site, due to the coronavirus outbreak, so summer is now plan B. Both Schussler and Saliterman are optimistic Galaxy will be just what people need in this fraught year.

Entrepreneurs and Covid-19
How Small Businesses are Turning Panic into Power
Will Private Jets Soar Because of Covid-19?
Return of the Coronavirus

“They’re already doing a hell of a job,” Schussler says. “It’s a marriage made in heaven.”