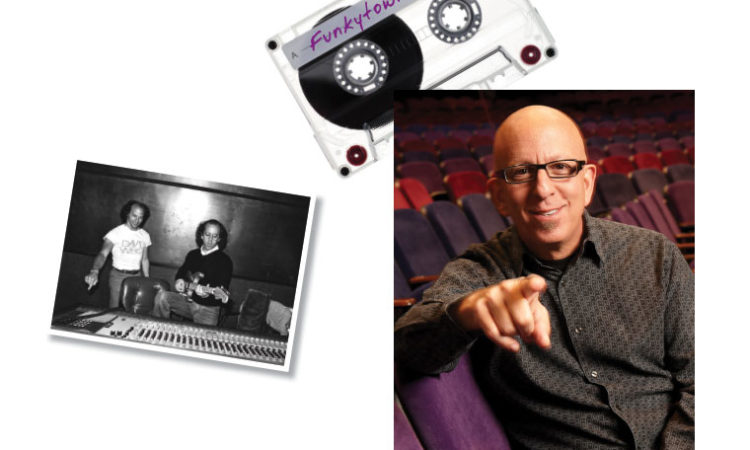 (left photo) Steven Greenberg (with guitar) and producer David Z at Sound 80 studios in Minneapolis during the heyday of âFunkytown,â written by Greenberg. Right: Greenberg today.Â

Prince was not yet a star in 1980 when Minneapolitan Steven Greenberg wrote and produced the dance-floor anthem “Funkytown” for the Minneapolis-based studio group Lipps Inc. They had a radio hit with a catchy song from the later stages of disco, and 37 years later, “Funkytown” remains a robust business for Greenberg.

Greenberg says he is unsure how many times the song has been licensed for movies, TV shows, commercials, video games and other uses. “Maybe over 500 [times],” he says. “A lot of it is not in the U.S.”

A version commissioned about a decade ago stands out: “There was a French nuclear energy company called Areva Energy,” recalls Greenberg. “They had the London Symphony Orchestra record a version at Abbey Road Studios.” Greenberg calls that interpretation “my absolute favorite.”

Greenberg, 66, remains in the Twin Cities. He is now pushing The Funkytown 15, a digital collection of 15 new versions of the song in a variety of musical styles: marching band, reggae, klezmer, acoustic blues, surf and more. The music is available through Amazon, iTunes, Spotify and Pandora. The target audience? The next generation of music industry pros who will seek to license the tune.

“It’s pretty much all about licensing,” says Greenberg. “It’s going to go to music supervisors and publishers.” Royalties generated by the ongoing popularity of the song have been “life-changing” over the years, says Greenberg.

Greenberg has had other businesses along the way. For more than 15 years he ran Designstein, an interactive advertising agency. He also operated October Records, a local music label with bands such as the Honeydogs. In the mid-1990s, he directed and produced a movie called—what else?—Funkytown, a documentary about aspiring Twin Cities bands.

Behind the scenes, a still-simmering legal battle continues over the ownership of the “Funkytown” copyright. “My lawyer says I own it and Universal Music Group says they own it,” says Greenberg, “and it has not been resolved.”

But Greenberg is looking ahead. If “Funkytown” is enduring, he wants his next generation to take over: “I have two sons who, hopefully, will run this thing someday.