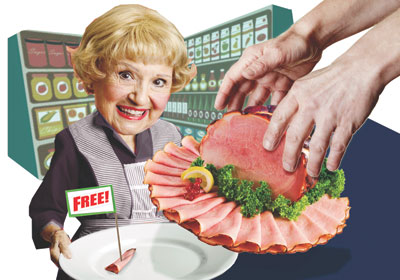 When it comes to taking free samples, at what point have you crossed the line?
June 02, 2013

While grocery shopping, how many free samples would you take? One toothpick’s worth? Two toothpicks? How about dozens? That’s the amount of lunchmeat that Supervalu says a Gem Lake man took from an unattended Cub Foods sample table.

Erwin Lingitz “violated societal norms” when he took two produce bags containing that much meat out of a White Bear Township store in April 2010, says Mike Siemienas, spokesman for Eden Prairie-based Supervalu, which owns Cub Foods. Lingitz’s actions prompted a store security guard to detain him on suspicion of shoplifting, and Ramsey County deputies were called to the scene.

Lingitz, meanwhile, contends that Cub employees gave him extra samples. In a lawsuit filed in March (Lingitz sued Supervalu even though the Cub in question is a franchise store owned and operated by Kowalski’s), he accused Supervalu of negligence, and argued that the company doesn’t have a formal policy on free samples.

He says store security and Ramsey County deputies violated his civil rights and used excessive force to detain him. He ended up in jail, although misdemeanor charges were eventually dismissed. He wants at least $375,000 in damages, including a minimum of $75,000 from Supervalu.

Supervalu isn’t playing: In a response to Lingitz’s lawsuit, it denied the allegations and listed items it claimed Lingitz had in his pockets when he was handcuffed: 14 to 16 packets of soy sauce, 0.61 pounds of summer sausage, and 0.85 pounds of beef sticks.

Supervalu claims Lingitz helped himself to excessive portions of various samples from unattended platters. On multiple occasions, a store manager saw Lingitz fill produce bags with 10 to 20 cookies from its “kids’ club cookie tray, which specifically limits the offer to one free cookie per child,” the company says.

“At what point have you crossed the line past what you were invited to do?” asks Lonergan. “It’s hard to know exactly. You’re certainly a lot closer when you’ve taken 1.4 pounds of meat.”