Fitness Centers Offer New Ways to Work It Out 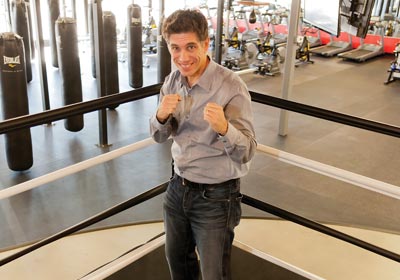 For two years in a row, the American College of Sports Medicine’s annual American Fitness Index hailed Minneapolis–St. Paul as the healthiest, fittest metro in the United States. Locally founded fitness firms Life Time, Snap, and Anytime are just three of many options metro-area residents can choose from for working out. But the dominance of these powerhouses hasn’t kept new fitness concepts out of the ring. Two cases in point: Local startups Discover Strength and Gymjab.

Luke Carlson, an exercise physiologist and founder of Discover Strength Personal Fitness, opened his first fitness studio in Plymouth in 2006 and a second in Chanhassen in April; in October, he launched his third, in downtown Minneapolis. Carlson’s Discover Strength concept is different from the typical fitness-center model, where people are urged to work out at least three times a week, preferably more, and appeals to anyone who is time-strapped, particularly busy professionals logging 60-hour workweeks. Carlson says that his approach is based on research which reputedly demonstrates that working out less often—no more than twice a week—at a higher intensity is better than working out more frequently at a lower level. “You don’t need to work out seven days a week for an hour a day,” Carlson says. “You can produce a measurable benefit, improve health protective factors, and decrease your risk of cardiovascular disease with one or two 30-minute resistance training workouts per week.”

To get the benefits Carlson describes, however, the workout intensity must meet a certain threshold. “Almost no one works out at the intensity level, or MET level, needed to improve health protective benefits,” Carlson says. MET stands for metabolic equivalent of task, and it measures the intensity of aerobic exercise. To reach the MET level where the intensity is high enough to result in benefits, exercisers need to expend at least three times their resting energy level, which is equivalent to three METs.

Fitness studios are part of the fastest-growing segment of the fitness industry, where clients pay per session, rather than monthly, quarterly or annually. Carlson notes that information supplied by the Roundtable for Executives in Fitness indicates that Discover Strength is the largest-volume fitness studio in the United States based on number of individual workouts per week. “We average 500 workouts per week in our 1,600-square-foot Plymouth site, and 70 to 100 workouts per week for a studio that size is considered busy,” he says.

Discover Strength’s 20 personal trainers, all with four-year degrees in exercise physiology or kinesiology (the study of body movements), work one-on-one with their clients to develop and monitor a 30- to 45-minute workout plan, which costs $49 per session. The firm also offers small-group training sessions for $29, in which two or three people work with a trainer.

Janel Dressen, an attorney with the Minneapolis firm Anthony Ostlund Baer and Louwagie, has been working out at Discover Strength in Plymouth for two years. “Over the course of the last 10 years, I’ve tried many different programs,” Dressen says. “I’ve used the elliptical, treadmill, fitness tapes, and DVDs at home. I have at different times lifted weights and taken weight training classes. I’ve done cardio and strength training combinations at a gym.”

After learning about Discover Strength from a colleague, Dressen signed up for a free introductory offer. “My No. 1 goal was to get in shape and stay in shape with the least amount of time involvement to improve my overall appearance and fitness,” she says. After two years on the program, she’s sold.

“It’s an amazing place,” Dressen says. “For the first one and a half years, I went once a week or every 10 days for 30 minutes. In terms of muscle development, I’m in the best shape of my life. I can see definition in my arms and legs that I’ve never seen before.” She also has increased the weight she can lift using the leg press by more than 100 pounds.

The new kid in the gym is Gymjab, which opened its first fitness facility in September. Located across from Ridgedale Mall in Minnetonka, Gymjab gives members an initial fitness assessment to develop a personalized regimen. When working out, members attach heart monitors to their bodies so that they and their trainers can monitor 30 body metrics including body fat, body mass index, muscle mass, bone mass, basal metabolic rate, total body water, visceral fat, and others. Members can access the data from home or work to monitor their progress. Unlike Discover Strength’s pay-per-use model, Gymjab offers monthly memberships ranging from $89 per month for an annual membership to $59 per month if Gymjab is visited four times a month.

Though Gymjab has just opened, Allan Charney, its founder and president, is already looking ahead to the kind of success that locally grown fitness centers Life Time, Anytime, and Snap have achieved. “I have been studying the fitness industry for four years,” he says. “I am looking to create something that is service-oriented and replicable.”

Charney’s first entrepreneurial venture was Play Ball Sports and Entertainment, which sold toys and sports collectibles to amusement parks and arcades; he founded it in 1990 while still a student at the University of Minnesota. Nine years later, when the firm’s annual revenues were $2.5 million, he sold his majority stake in the company. In 2007, he left Cincinnati-based glove and raingear maker Totes Isotoner, where he was responsible for managing $7 million in branded and private-label business. A few years ago, he saw an opportunity for a different type of fitness business.

Gymjab’s facility has five exercise bays: a cardio bay with treadmills, spin bikes, and rowers; a group fitness bay where members spend 30 minutes in cardio and 30 minutes participating in group fitness; a bay with a punching-bag rack for boxing and kickboxing; a boxing ring where members box with someone holding mitts; and a strength training bay where members take classes. The “jab” in the company’s name refers, of course, to boxing, which provides one of the ways Gymjab distinguishes itself from other fitness centers. “Members can also pay to get into the ring with a professional boxer,” Charney says. Gymjab currently has nine trainers, all certified in group training and fitness.

“I am not a fitness freak.” Charney says. “I set this concept up for a rollout of three to five corporate stores and then to develop a franchise. My goal is to watch the numbers on this store for the first six months, and then start to look for real estate. I like the Roseville area, the Edina area, and maybe Maple Grove.”

While there might seem to be a hyperabundance of established fitness facilities in the Twin Cities, there always seems to be space in the gym for upstarts. “The fitness business, generally speaking, is very fragmented,” says Sean Naughton, senior lifestyle analyst with Minneapolis investment firm Piper Jaffray. “The lower-cost-of-capital models provide startups with a lot of opportunity and low risk. There is opportunity for startups to be successful, but there are a lot of different players competing for a finite number of consumers.”

Studio or specialty gyms tend to be less expensive than full-service fitness facilities that typically have swimming pools, basketball and tennis courts, and other fitness amenities. “Consumers are looking for things to keep their routines interesting,” Naughton says. Both Discover Strength and Gymjab believe they offer fitness-focused locals fresh ways to sweat it out.