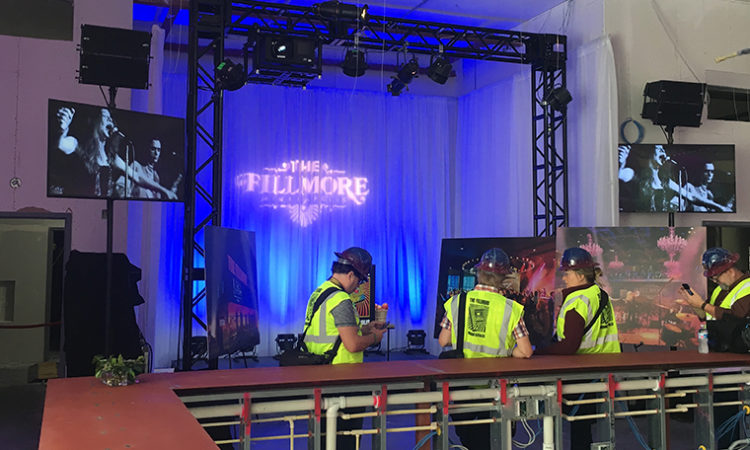 Reporters gathered at a side bar in the forthcoming concert venue.

Fillmore Minneapolis to Open in Mid-February

Forthcoming concert venue would have roughly the same capacity as First Avenue.
By Dan Niepow
August 08, 2019

On Thursday morning, a handful of reporters gathered for a bare-bones look at the future Fillmore music hall in Minneapolis’s North Loop neighborhood.

It’s been two years since developer United Properties began discussing plans to open the venue, which will be modeled after the rock theater of the same name in San Francisco. At Thursday morning’s press briefing, venue operator Live Nation said the Minneapolis Fillmore will open by mid-February.

In his remarks, Frey said the 36,000-square-foot venue fits into his “overarching vision” for the North Loop area, where he’s aiming for a mix of residential, business, commercial, and entertainment developments.

“This is something that’s going to add in an extraordinary extraordinary wave of vibrancy to a neighborhood that’s already rockin’,” said Frey, who had briefly attempted to rouse the crowd into a singalong before delivering his remarks.

The Fillmore will have space for 1,850 people, which would put it roughly on par with First Avenue, which can hold 1,800 people between its main floor and 7th Street Entry venue. (Still, the 8,000-plus Armory dwarfs both.)

Rob Bension, president of Live Nation’s clubs and theaters division, said the project has actually been three years in the making.

Live Nation will announce its first roster of performers in October, with all the remaining finishes to the building to be completed in November.

The Minneapolis Fillmore will be the ninth Fillmore in the U.S., Bension said.

The new venue also will include a Trax Burgers and Bar restaurant, along with an Element by Westin Hotel.