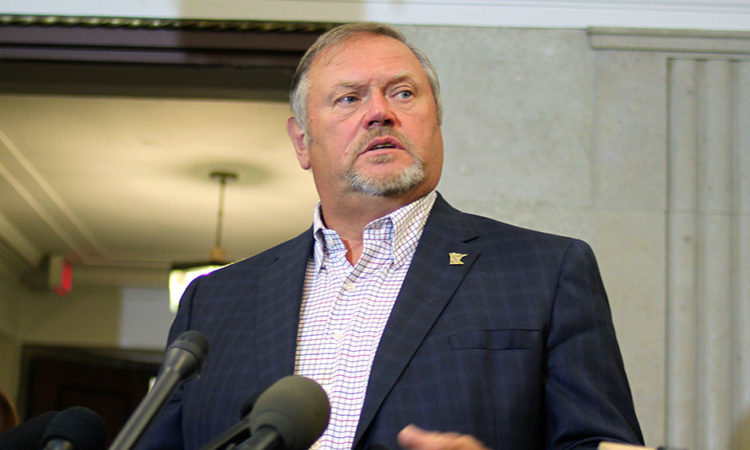 Independent state Sen. Tom Bakk and his DFL counterpart in the House, Rep. Fue Lee of Minneapolis, say they want to pass a bonding bill this year. But with two weeks to go in the session, Bakk’s committee has met just twice so far — and hasn’t passed any proposals.
By Walker Orenstein
May 05, 2021

When state Sen. Tom Bakk of Cook became an independent in 2020 after nearly three decades with the DFL party, Republicans who control the Minnesota Senate rewarded the change by putting him in charge of writing what’s known at the Capitol as a bonding bill — a package of publicly-funded construction projects.

Exactly what the results will be this year from Bakk’s political shift remains more or less a mystery, however. The former Senate DFL leader has outlined his vision for a construction budget, but with two weeks to go in a 2021 legislative session that ends May 17, Bakk’s bonding committee has met just twice and hasn’t passed any proposals.

Meanwhile, in the House, the DFL majority has held more than two dozen hearings and released a $1 billion plan that pumps hundreds of millions of dollars into recovery for Twin Cities businesses damaged in riots after police killed George Floyd. But the Democratic proposal has not attracted any Republican support, something it needs, since general obligation bonds must be approved by three-fifths majorities of both the House and Senate.

Bakk and his DFL counterpart in the House, Rep. Fue Lee of Minneapolis, say they want to pass a bonding bill this year. Yet the clash of legislating style and policy substance means the final product will likely be hashed together at the last minute.

Waiting for guidance on ARP money

After the 2020 election, Republicans held a slim one-vote majority in the Minnesota Senate. That changed when Bakk and Sen. David Tomassoni of Chisholm left the DFL.

The GOP said both could chair Senate committees, giving them more power over state government. During the session, the two breakaway legislators have voted with Republicans on many issues, giving the GOP some political breathing room to better control their Senate agenda.

Bakk, a retired carpenter, now leads the Senate’s Capital Investment Committee, which is tasked with writing a bonding bill. In such bills, the government borrows money and takes on debt backed by general state taxes to pay for a range of construction projects such as wastewater infrastructure, highway work, housing, public transit, upgrades to college campuses and new government buildings.

In October 2020, lawmakers passed a $1.9 billion bonding bill. It included money to build an amphitheater in north Minneapolis, a seawall in Duluth, bus rapid transit and more than $269 million for clean water infrastructure across the state, which was a historically large investment in water projects.

The Legislature traditionally approves smaller bonding bills in odd-numbered years like 2021, when lawmakers have the difficult task of writing a two-year operating budget.

Bakk’s committee met once in February to discuss the basics of how a bonding bill works, and didn’t meet again until last Friday, when lawmakers discussed a few bills that would make technical corrections to measures passed in the last construction budget.

The committee has also yet to release a bonding plan. In an interview last week, Bakk said his panel hasn’t met largely because the Senate has more committees than usual during the pandemic — meaning lawmakers are busy — and the Capital Investment committee hasn’t found a consistent time or location to get together.

It’s not that Bakk doesn’t want a bonding bill; in fact, he has a wish list for 2021. Bakk said he hopes lawmakers fix the technical problems from 2020, and pass a bill that does not include projects around the state championed by individual lawmakers. Instead, he wants to focus on a few traditional bonding initiatives like upgrading water infrastructure and preserving buildings and infrastructure owned by the University of Minnesota and Minnesota State higher education systems, as well as state agencies like the Department of Natural Resources.

While lawmakers often use individual projects to entice support for bonding bills across the Legislature, Bakk said the stuff that’s important but “not sexy” often gets cut at the behest of a “flashy new building in someone’s district.”

Bakk said he’s waiting to make a more specific plan in part because the state is still waiting for detailed guidance — due in after May 10 — from the U.S. Treasury Department on how it can spend $2.6 billion from Minnesota’s share of the federal stimulus plan passed by Congress this year.

Legislative leaders must figure out how to divvy up that money — though Gov. Tim Walz may try to spend some or all of the stimulus money unilaterally — and Bakk said using stimulus cash for building projects instead of state borrowing might be more attractive than using federal money on other government programs that will extend after the one-time federal stimulus runs out.

The stimulus also included a separate $179 million dedicated for Minnesota specifically for capital projects, though lawmakers also need some guidance on what that money can be used for.

Lee, who chairs the House Capital Investment Committee, put together a $1.03 billion plan that includes $500 million in standard, general obligation bonds, $500 million in appropriation bonds, which are used in the bill to fund initiatives like housing infrastructure and the Twin Cities redevelopment efforts, as well as $30 million in general fund cash to pay for upgrades to workforce development organizations that help people of color. (Appropriation bonds and general fund spending only need a majority vote, and are sometimes passed separately from general obligation bonds.)

“It is my hope to have a robust bonding bill,” Lee said.

The House measure, the product of nearly 30 public hearings this year, includes $300 million to help parts of Minneapolis and St. Paul rebuild following arson and burglary last summer that damaged hundreds of businesses across the cities. It also includes about $250 million in bonds for public housing upgrades and affordable housing, as well as $50 million to help emergency housing shelters. It also has money for security measures at the state Capitol.

The proposal is much larger than Walz’s $550 million proposal. Yet Lee said the House DFL plan is focused in part on making infrastructure more resilient to climate change and in part on helping people of color that have been historically left behind and were set further back by the destruction of businesses and housing. “We as a state have always stepped up to help out communities” in need throughout the state, Lee said. “I think it’s time for us to make the investment into the commercial corridors in our two largest cities so the entire state of Minnesota can thrive.”

House Republicans haven’t supported the DFL bill. The GOP has called for the Legislature to approve the technical corrections to the 2020 bill separate from any new bonding, and so far the House has combined the two together. Republicans, and officials in Greater Minnesota, have also criticized the House measure as too focused on the Twin Cities metro.

Bakk said it’s possible some or all of the money earmarked for the cities, and the workforce nonprofits, could come out of the state’s cut of the federal American Rescue Plan, which also sent $2.12 billion to local governments in Minnesota. He also said the plan is part of a larger DFL budget proposal that relies on new taxes for higher earners, an idea Senate Republicans have opposed.

In a letter to Lee’s committee, Little Falls Mayor and President of the Coalition of Greater Minnesota Cities Greg Zylka said “far too little” of the House bonding bill will help areas outside of the Twin Cities metro on issues like economic development, parks and trails and workforce housing.

It’s not that the coalition sees the money for the Twin Cities as illegitimate or unnecessary, said Bradley Peterson, executive director of the Greater Minnesota cities coalition. But, he said, “when you are spending a billion dollars, I think that there can be more balance in these programs.”

Bakk, who had similar critiques of the House plan, said he didn’t want to start negotiating until the House had a bill it could pass and until the Legislature gets proper guidance from the feds on how to spend the stimulus money.

Since guidance from the U.S. Treasury will come next week at the earliest, and Bakk is only now scheduling hearings on bills to include in a potential bonding plan, that means negotiations could move behind closed doors as part of a larger, last-minute debate on a state budget and other topics like police accountability measures.

At his committee hearing Friday, Bakk and other lawmakers noted elected officials from the House and Senate used to meet in conference committees, where they would debate differences over bonding in public. But those are triggered when the House and Senate pass competing versions of a bill, which hasn’t happened.

If lawmakers don’t strike a bonding deal before May 17, they could also pass one during a special session. The Legislature could go into overtime to reach agreement on a two-year operating budget. Lawmakers have until June 30 to pass the operating budget before state government shuts down.