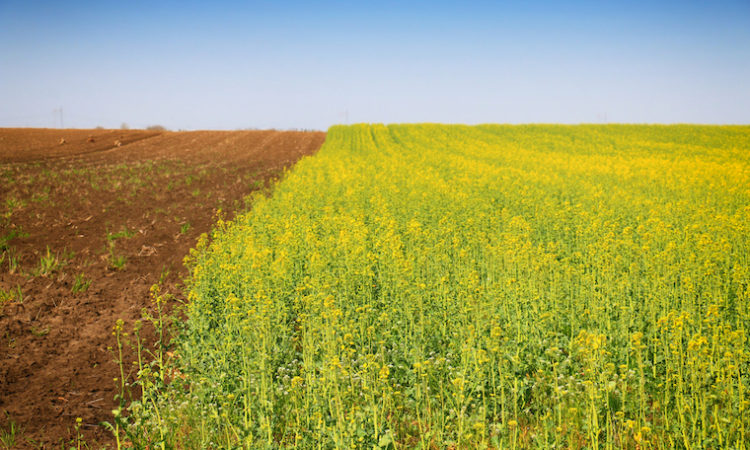 Prices for most ag products are linked to world markets, but Minnesota farmers say it’s possible to take advantage of market niches.
By Liz Fedor
October 14, 2019

Long before businessman Dean Phillips became a congressman, he was sitting in Carolyn Olson’s farm home near Cottonwood, Minnesota, in 2008.

Olson, co-owner of Olson Organics and a self-described outgoing person, was talking with Phillips about her farming operation that’s located 140 miles southwest of Minneapolis.

“Like a good Lutheran, I made a Bundt cake,” Olson recalled Monday during a panel discussion at a Food Ag Ideas Week event in St. Paul. Over cake and conversation, she and Phillips made a connection. It led to Olson selling some of her grain that’s used in vodka production for Phillips Distilling Co.

“We were willing to sit down and listen,” Olson said. “You never know where these relationships take you.”
Olson was among three farmers on a panel called “A Conversation Between Farmers on the Future of Farming.” The special week’s events were planned by Grow North, which fosters connections among entrepreneurs, problems solvers and innovators in the food and agriculture sectors.

The agriculture discussion came at a tough time for farmers. “We haven’t started harvest yet,” Olson said. Many Minnesota farmers got their crops in later than normal because of a wet and cold spring, and now they’ve been hit with similar rainy weather when they want to be out in the fields harvesting their crops. The U.S. trade war with China also has caused stress in farm communities, because China had been a big customer for Minnesota soybeans.

On Monday, moderator Mitchell Hora, an Iowa farmer and co-host of the Field Work podcast, steered the panelists toward topics over which they had more control, such as sustainable farming practices. The farmers explained how they are engaged in precision agriculture, which means only using as much fertilizer and water as needed to produce good crops. They also talked about other steps they take to promote the health of their soil and reduce farm fertilizer and chemical runoff into waterways.

Although prices for many agriculture products are linked to world markets, the three farmers identified opportunities for farmers with entrepreneurial mindsets.

Farmer Eric Sannerud, who is CEO of Mighty Axe Hops, grows hops for craft brewers on 80 acres in Benton County in central Minnesota. “There was no Minnesota hops industry,” Sannerud said. “In the space of six years, we’re creating it.”

Olson has been farming for more than 30 years, and she started to make the transition to organic farming in 1998. “There are a lot of opportunities,” she said. “What are your talents? What are your passions?” After deciding to grow organic crops, Olson said that she carefully tracks her cost of production and sometimes uses that data when negotiating prices with buyers.

He’s traveled to Nairobi, Kenya, where residents were eager to keep themselves alive with any food supply. In contrast, Yost said, he observed shoppers in a high-end suburban New York grocery store with plenty of Range Rovers and Mercedes in the parking lot. The wealthy shoppers wanted high-quality food and they were willing to pay high prices, he said.

Beyond those two extremes, Yost said, many consumers in recent years have expressed a desire to know more about their food sources. “We need to be an open book,” Yost said, referring to where and how food is grown.

Sannerud, who was not raised on a farm, said, “Getting into agriculture is extremely difficult.” He cited land and equipment costs as barriers to entry into farming, and also said that continued consolidation of farms erodes the health of rural communities.

While the three farmers have operations that are quite different, they all talked about the need to educate consumers about farming, use technology and unbiased data to improve their practices, and network within the food and agriculture sectors.

Olson serves on the board of the Agricultural Utilization Research Institute, which many farmers commonly refer to by its acronym AURI. It exists to develop new uses for agricultural products. Getting involved with AURI is a good way to meet farm entrepreneurs, Olson said.

In agriculture, she stressed, “For us, it all comes down to relationships.”