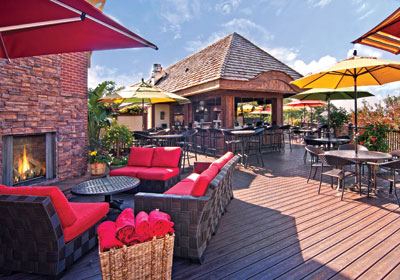 A century ago, Henry James declared “summer afternoon” to be the two most beautiful words in the English language. Here in Minnesota, where summer is in short but spectacular supply, there’s no better place to extend the afternoon (especially with guests from out of town) than on one of the Twin Cities’ most beautiful rooftop or garden patios.

Brit’s Pub
Challenge your favorite clients to a round of lawn bowling in the rooftop English Garden Park. Afterward, retire to the Veranda Bar for a pint of Bass ale, a plate of Scotch eggs, chips with curry sauce, and photo-worthy views of downtown Minneapolis. 1110 Nicollet Mall, Minneapolis, 612-332-3908.

Seven Sushi Ultralounge and Skybar
Just like James Bond, the name says it all. No mere rooftop patio, this sexy, boutique hotel–style scene offers a taste of Vegas in downtown Minneapolis. Chill on the couch in your own cabana, order VIP bottle service, and enjoy the views of beautiful people illuminated by the lights of the city. 700 Hennepin Ave., Minneapolis, 612-238-7770.

Solera Restaurant
For anyone who grew up on drive-in movies, Solera offers a grown-up version of this vintage summer pleasure. Perched high above the glittering marquees of the Theater District, the rooftop patio is the perfect place to sip sangria, savor a procession of Spanish tapas, and enjoy classic films. (Casablanca, Raiders of the Lost Ark, E.T., and Back to the Future have been among the movies that have played here in the past.) 900 Hennepin Ave., Minneapolis, 612-338-0062.

Stella’s Fish CafÃ© and Prestige Oyster Bar
Docked in the heart of Uptown, Stella’s rooftop patio feels like the deck of a cruise ship. Join the crowd of sun- and fun-seekers and order a round of Shucking Awesome margaritas, a bucket of peel-and-eat shrimp, a dozen oysters on the half-shell, and watch the sun set over the city’s sparkling skyline. 1400 W. Lake St., Minneapolis, 612-824-8862.

moto-i
Just east of Stella’s near the corner of Lyn-Lake is Uptown’s other great rooftop patio. This quirky, Japanese-inspired brewery makes its own namazake, or draft sake. Invite your fellow craft connoisseurs to join you for a Ginger Mistress saketini or a Fulton’s Lonely Blonde, a bowl of miso popcorn and a platter of plum wings, lettuce wraps, and sweet potato fries. 2940 Lyndale Ave. S., Minneapolis, 612-821-6262.

The Liffey
As soon as the clock chimes five o’clock somewhere in the world, every seat on the grandly named Terrace at the Liffey is taken. Join the crowd of local revelers and order a pint of Guinness or a glass of 2 Gingers Whiskey, founded by former Liffey owner Kieran Folliard. Sit back, take in the views of downtown St. Paul, and offer an Irish toast to the good life. 175 W. Seventh St., St. Paul, 651-556-1420.

The Happy Gnome
Long before Draft magazine named the Gnome to its 2012 list of America’s best beer bars, local craft beer connoisseurs have flocked to this former firehouse for 76 craft drafts, plus hundreds of ales, bitters, bocks, and whiskies from around the world, along with inventive, gastro pub–style food, and a charming patio on which to enjoy it all. 498 Selby Ave., St. Paul, 651-287-2018.

W. A. Frost and Company
Walk through the hallowed halls of the former pharmacy of Mr. W. A. Frost and find yourself on the Twin Cities’ most enchanting patio. It’s easy to imagine F. Scott Fitzgerald, who lived nearby at the Commodore, strolling down the cobblestone streets of Cathedral Hill to meet Henry James for a tangy gin and tonic mixed with house-made tonic water, followed by an elegant dinner and a glass of 20-year-old tawny port. 374 Selby Ave. St. Paul, 651-224-5715.

Rudy’s Rooftop
One year ago, Bill Foussard, owner of White Bear Country Inn, opened Rudy’s Rooftop as a companion to Rudy’s Redeye Grill and it quickly became a destination for the food, the comfortable furnishings, and the fireplace. Arrive early to score a pair of red lounge chairs and order a round of Rudytinis and an amuse-bouche of bull bites, followed by Rudy’s legendary pan-fried walleye. 4940 Highway 61 North, White Bear Lake.