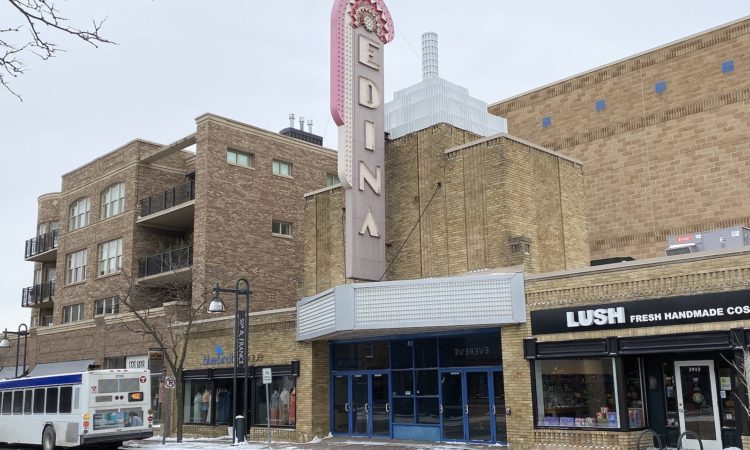 Setting its sights on summer blockbusters, Mann Theatres is ready to begin revitalization of the historic theater, including a new live performance space.
By Allison Kaplan
February 24, 2022

Renovation of the Edina Theatre is expected to begin within the next two weeks, and new local operator Mann Theatres says the historic movie house, which went dark nearly two years ago, could reopen in June.

“I’d love to be open in time for Top Gun 2,” Mann Theatres co-owner Michelle Mann said this week. Her industry is banking on Top Gun: Maverick, the sequel to the 1980s hit, to be a summer blockbuster of Spiderman proportions, and reinforce what’s been a very gradual return to movie theaters since the onset of the Covid-19 pandemic. For the Edina Theatre, long a destination for artsy, independent films, reopening with a mainstream hit would signal a new era. Mann envisions showing a mix of independent films and Hollywood movies—along with live performances.

Plans call for an estimated $1.5 million in rehab on the four-screen theater, which dates back to 1934. Updates will include reclining seats, bringing total capacity down to 490. A new upper level bar will be designed to mirror the “Gold Room” from The Shining. And in one of the more significant changes, a stage will be built in one of the smaller theaters for live performances. It won’t have capacity for large productions, but Mann imagines comedians, musicians, community theater, and TedX-type talks using the stage. “It’s one more way to focus on community,” she said.

The most visible symbol of the theater’s resurgence, the Edina marquee, which was declared an historical landmark more than 30 years ago, will also be restored and relit.

“That theater sign is in the background of so many photos—it’s iconic,” said Edina’s economic development manager Bill Neuendorf. “50th & France is a happier, more vibrant place when those lights are turned on.”

Credit Neuendorf with saving the theater when building owner Suzanne Haugland couldn’t find an operator interested in stepping in after Landmark pulled out. “Mann was my first call,” Nuendorf said. “I have a lot of faith in the Mann family.”

Initially Neuendorf, who moved to Minnesota 12 years ago, didn’t realize he was brokering a homecoming of sorts. Mann Theatres owned the Edina Theatre for a short stint in the late 1970s. “We’re extremely honored to be back,” said Michelle Mann, part of the third generation to run the Bloomington-based company, with her brother Michael. Mann’s grandfather Marvin and his brother Ted started the company in 1937 and her father Steve and his brother Benji took it over.

At one time, Mann’s portfolio included nearly 50 screens in several states. Today, the company operates seven theaters in Minnesota including two St. Paul icons, the Grandview and the Highland, as well as multiplexes in Plymouth, Champlin, Grand Rapids, Hibbing and Baxter. Mann permanently closed its Hopkins theater during the pandemic. “We didn’t own that building and it just didn’t make sense to carry on,” Michelle Mann said. Plus, Hopkins showed second run films, which are a tough sell today with the more expansive streaming options available to consumers at home.

“The pandemic has been brutal,” Mann acknowledged. Mann Theatres, which remained completely dark for six months in 2020, received more than $2.5 million in federal relief aid. “We’re hoping to get back to 70 to 80 percent of where we were in 2019. We’ve seen an incline and expect it to keep going.” Mann noted that concession sales, where theaters make most of their money, are up. “I think people missed the experience of going to a theater.”

The city of Edina is kicking in $500,000 for theater renovations. Of that, $200,000 comes from the city’s federal relief monies; and $300,000 comes from a tax increment financing account earmarked for revitalization.

“This is an important asset for the local economy. Having an entertainment venue at 50th drives traffic to the business district,” Neuendorf said. “The theater being closed for two years has definitely had an impact on restaurants, stores and foot traffic.”

Encouraging evening traffic was a key factor as well, Neuendorf said. “We could have replaced the theater with office or retail, but the city of Edina has invested millions in parking structures, and it allows those investments to be used in the evenings as well.”

The city is expected to sign off on final plans and permits in the next few days. Mann said demolition work inside the theater could begin in early March.