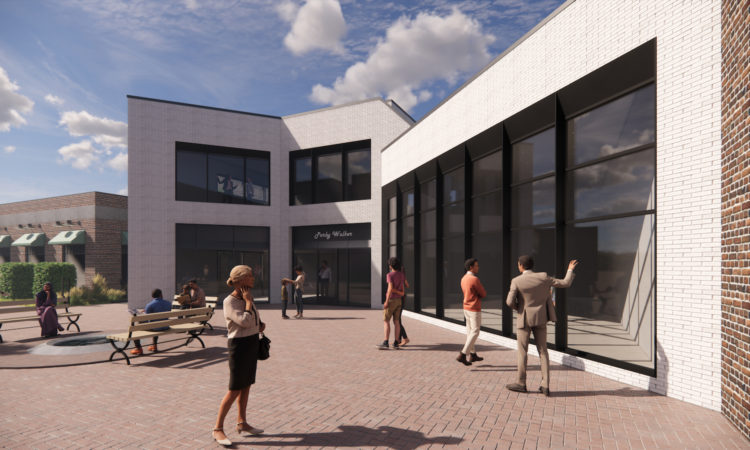 The developers of Nolan Mains now control nearly a quarter of the commercial space at 50th & France. What will it mean for Edina’s crown jewel?
By Allison Kaplan
April 29, 2021

Should we just start referring to the entire 50th & France shopping district as Nolan Mains?

Buhl Investors, the firm responsible for the new development on the backside of 50th Street that is attracting popular indie boutiques and sought-after new-to-market nationals, has snapped up two other commercial buildings in downtown Edina. With the Carillon building at 3922 W. 50th St. and the Pinehurst Building anchored by Anthropologie at 4999 France Ave. S. in its portfolio, Buhl Investors now controls nearly 100,000 square feet of commercial space at 50th & France—about a quarter of total space available in the retail district (aside from anchors Lunds & Byerlys and U.S. Bank).

J. Morten’s Meat Market, which recently opened in the former Caribou Coffee space, is Buhl’s first deal at the otherwise fully leased 4999 France Building, and a sign of things to come. Leasing principal Pete Deanovic thought the neighborhood could use an independent, high-quality butcher shop. A shoe boutique is high on his wish list.

If that sounds like a lot of power for one landlord relatively new on the scene, 50th & France veterans don’t seem worried.

“Pete’s put a lot of effort into getting [businesses] into this corner,” said Suzanne Haugland, who owns the 3924 50th St. building that backs up to Nolan Mains and houses her At Home & Co. interior design store. She owns other high-profile properties at 50th & France as well, including the vacant Edina movie theater, which Landmark Theatres gave up during the pandemic, and the empty southwest corner spot that Sur La Table closed after declaring bankruptcy last year.

“We had two years of construction that just about killed us, and then as we were picking up momentum, Covid hit and knocked out tenants that had been here for 15 years,” Haugland said. She sees interest bouncing back this spring. It’s mostly national retailers that are looking at her properties, including one that is serious about the Sur La Table space. “Nationals have more money and believe there is going to be a retail explosion as we come out of Covid, so they all want to add stores.”

Future of the Edina theater?

Haugland is also in talks with a potential tenant interested in reopening the four-screen movie theater, a landmark on 50th Street. “Keeping it as a movie theater is the goal, but the options are limited,” she said. “The theater business isn’t what it used to be.”

The 7,500-square-foot Carillon building, which Buhl acquired this month for $1.8 million, has street-level vacancies, both facing 50th and an alley on the west side of the building that’s long proven a tough location for retailers and service businesses alike. But spaces without visibility on 50th don’t deter Deanovic, who plans to activate the Nolan Mains plazas this summer with concerts and activities for kids. Buhl hired Minneapolis-based Studio BV to update the Carillon as Deanovic sets out to find tenants that compliment his Nolan Mains mix, where another “chef driven” restaurant will soon be added, in addition to St. Paul-based Sweet Science Ice Cream.

Haugland said 50th & France landlords are amicable, and that includes Buhl. “We all get along. If my square footage doesn’t work, we share names of others. We have a common goal in mind: to get this neighborhood back on track.”

Leasing activity is picking up across the Twin Cities, said Stefanie Meyer, senior vice president and principal of Mid-America Real Estate. “Everything was put on hold last year,” she said. “Now we’re even seeing competition on some spaces.”

Meyer believes changes in building ownership bode well for 50th & France. “Sometimes new blood, with different connections and ideas can be helpful.” Edina is always among the top choices for national tenants looking at the Twin Cities because of its “great balance of daytime traffic and residential density,” Meyer said. Between the Southdale area and 50th & France, the latter wins out for its charm.

Before, Uptown could be a distraction from 50th & France among retailers looking for a neighborhood location, Meyer said. But with so many Lake and Hennepin storefronts boarded up, that’s less of a challenge to 50th & France today.

Deanovic believes 50th & France can support the largest concentration of independent and destination retail in the Twin Cities. Local retailers at Nolan Mains are effusive in their praise of Deanovic, who they describe as more of a partner than a landlord. He’s been proactive about recruiting independent shops, including Dugo and Scout, and willing to negotiate on lease terms, like the six-month pop up home decor brand Brooke & Lou just opened. Deanovic just signed Nolan Mains’ first national fashion brand: Billy Reid will open an 1,800-square-foot store on Market Street in mid-May.

“We think it’s great,” said Max Musicant, acting director of the 50th & France Business Association. “Buhl has really been active and involved in creating successful environments for their tenants. Their success is the district’s success.”