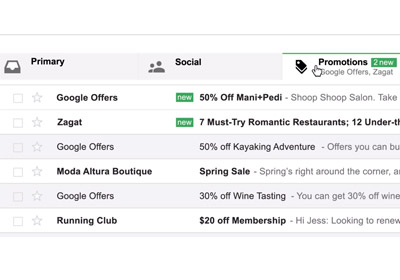 At the end of May, Google began adding new tabs to Gmail accounts in order to filter certain messages away from a user’s primary inbox; some Minnesota companies are confident that their content will still reach consumers.
September 27, 2013

We’ve all been there. We scan our email for subject lines that hint at ads and promotional deals, checking off nearly every box and executing a satisfying batch delete.

This summer, however, Google made a change that could alter that ritual by instituting segregated tabs for messages like social media notifications and business promotions that are sent to its 425 million users—a number that reportedly puts it ahead of Hotmail as the largest email service in the world. The details on each of the tabs—as well as methods of removing them—are explained here.

While the move was described as a way to help better organize users’ inboxes, it has also riled up e-mail marketers who see the change as a barrier to their potential customers.

Large Minnesota corporations like Life Time Fitness and Best Buy, however, said they aren’t worried about the change and haven’t seen a significant impact. “Gmail accounts for only a small percentage of our subscriber base,” Life Time spokeswoman Natalie Bushaw told Twin Cities Business. “However, we will continue to review our strategies to ensure optimization of inbox placement within Gmail. The industry-wide impact is still being understood and as more information is revealed, we’ll adjust accordingly.”

Bushaw also said that Life Time redesigned its e-newsletter in June and has had an “overwhelmingly positive” response, “Content counts!” she added.

While many marketers are worried that the filter will lead to users totally ignoring emails relegated to the promotions tab—or only sifting through it once a week—Julie Verhulst, a director at Minneapolis-based brand marketing firm Ciceron, believes the new tab layout might actually benefit marketing emails.

“I'm opening more marketing emails than ever before because I'm not just deleting them to clean up my inbox,” said Verhulst. “I know that when I have time to read articles/newsletters, that those will be waiting for me under my ‘update’ or ‘promotions’ tab . . . and my inbox is no longer cluttered.”

Additionally, 44 percent of email messages are read on mobile devices, and Gmail tabs do not currently affect a majority of mobile email users, unless they are accessing Gmail via a web browser, according to Ciceron. The firm also said it expects business-to-business service providers to see less of an impact than business-to-consumer companies, as Gmail is used primarily for personal accounts.

However, despite all that, Ciceron said it did see a one-percentage point drop in open rates for its newsletter since the Gmail change.

Google began rolling out the new tabs at the end of May, and while that’s a relatively short time period to judge their effectiveness, email marketer MailChimp also crunched the numbers on Gmail’s open rates—post-layout change.

Excluding a slight jump in activity the week after the release—likely due to its novelty—MailChimp saw the same 1 percentage point drop in Gmail open rates as Ciceron.

Although 1 percent is very small, the leader of the study wrote: “From looking at a year and half’s worth of data, I can say that kind of behavior isn’t normal. I’m not willing to declare an emergency just yet. However, I would say this is an early indicator, and we’re definitely keeping our eye on it.”

According to the New York Times, the change may be especially problematic for sites that offer short-term, daily deals like Gilt and MyHabit, who rely on consumers to check in with their emails every day for limited-time sales.

Verhulst agrees with Bushaw, however, that content is what ultimately dictates performance, “I think what this change does is force companies to create email marketing programs that provide value to their customers/subscribers,” said Verhulst. “If people take the time to subscribe to your emails, and you continue to provide value, they will continue to seek out your email messages, regardless of what tab they are sent to.”

At the moment, Google only offers the five individual tabs but has said that it is considering a further customizable option that would allow users to create their own additional, specialized tabs.