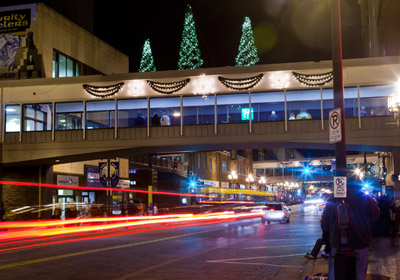 Selected “pop-up shops” will operate rent-free for two to three months as part of a program meant to fill vacant Duluth storefronts during the holidays.
November 10, 2013

This holiday season, the city of Duluth is extending a gift to local entrepreneurs: free (albeit temporary) downtown real estate.

Duluth’s Greater Downtown Council recently launched a “pop-up” program, through which it has partnered with the owners of downtown buildings to help fill vacant storefronts during the holidays.

The council seeks a “brief letter” from applicants explaining their interest in the project, any relevant experience, and confirmation that they can have a pop-up shop up and running by November 30—or so-called “Small Business Saturday.”

The selected shops are expected to remain open through January 10, although property owners may consider extending that date. They will have access to the space rent-free for two to three months but must cover utility costs.

Interested applicants can email their submissions or learn more here, although they are encouraged to act quickly. Greater Downtown Council President Kristi Stokes told Twin Cities Business on Thursday that applicants must meet basic requirements, but they’re also being considered on a first-come, first-served basis.

By noon on Thursday, Stokes said her organization had already received 20 submissions.

A panel of judges that the Greater Downtown Council assembled will likely select winners by next week, Stokes said. A goal of the project is to “encourage active and lively storefronts for the holiday season,” and the business concepts must be “complimentary to the retail mix in Duluth’s downtown.” They must also be an appropriate fit for the vacant spaces.

The participating properties include two spaces in Duluth's “skywalk,” which comprises a downtown skyway system. One is 500 square feet; the other, 444 square feet. The other spaces that are up for grabs include four storefronts along Superior Street that range in size from 1,000 to 10,000 square feet.

It’s yet to be determined how many pop-up retailers will be included, as there may be an opportunity for multiple shops to co-inhabit one of the larger spaces, according to Stokes.

The Greater Downtown Council said its initiative reflects a growing national trend of temporary retail stores. The program represents a good opportunity for entrepreneurs to pilot a concept or for existing business owners to test whether they’d like to open a new location downtown, Stokes said. In that respect, it could also benefit building owners, if a pop-up shop wants to stick around and opts to sign a lease.

The initiative closely resembles a 2011 contest through which two entrepreneurs were given free rent for a year, along with a long list of other perks, in downtown Duluth. That contest, however, demanded a much more intensive application process involving detailed business plans.

Twin Cities Business recently published an in-depth report on the Duluth economy, calling attention to the myriad industries that are attracting talent and investment in the port city. Major development projects include a planned downtown office tower that will house the headquarters of women’s clothing retailer Maurices.