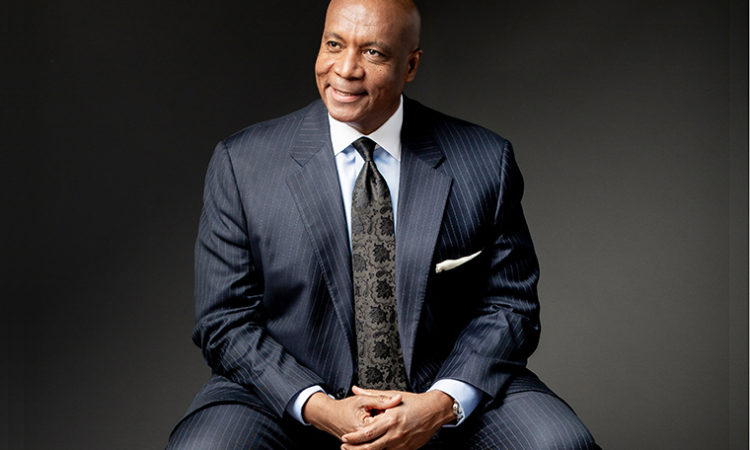 Kevin Warren was hired on with the Vikings in 2005. (Photo courtesy of the Minnesota Vikings)

Warren shares his thoughts on leadership, management, and diversity as he gears up to leave the team for a new gig with the Big Ten Conference.
By Dan Niepow
June 10, 2019

More than half of all NFL players are African-American, but the league’s upper echelons remain overwhelmingly white. According to a 2017 report from the Institute for Diversity and Ethics in Sport, more than 70 percent of leaders in the NFL League Office were white.

The tide has been changing, albeit slowly. In 2016, the NFL counted 21 people of color at or above the vice president level, according to the report. By 2017, that figure grew to 31.

Leaders like the Minnesota Vikings’ Kevin Warren are helping to drive change. The first African-American chief operating officer in NFL history, Warren joined the Vikings in 2005 after helping the Wilf family lock down a reported $600 million deal to buy the team. He was promoted to COO in February 2015. An attorney by trade, Warren in September will leave his post at the Vikings to take a new job as commissioner of the Big Ten Conference based out of Rosemont, Illinois.

The move marks another sports milestone: Warren will be the conference’s first black commissioner.

Though he’ll soon be leaving the NFL, his legacy of diversity and inclusion remains in place. In an interview with TCB, Warren shares a few thoughts on management, leadership, and diversity, along with his take on his time in Minnesota.

Q | What do you feel proudest about during your time with the Vikings?

A | Helping a great group of people to build a first-class, best-in-class culture. And also accomplishing some major projects, such as building U.S. Bank Stadium, hosting Super Bowl LII, and building the Twin Cities Orthopedics Performance Center. We’ve created an environment that will last for the next 40 to 50 years.

Q | What would be one thing you’d like to see changed with the Vikings going forward?

A | I would just like to see a Lombardi trophy in the lobby.

Q | Why the switch from the NFL to the NCAA?

A | When you deal in sports or business, you’re dealing with similar issues. You’re trying to make people you work with better and create an environment for them to be better people. I’m looking forward to an opportunity to be able to work with some new people and some people I’ve known for a while. Hopefully my skillset can help make individuals better.

Q | Do you have anyone in mind to take over your old gig?

A | I’m working hand-in-hand with the Wilf family, and I know they’ll do the right thing. They’ll do what’s in the best interest of the franchise, all the employees, and the fans. We’ll work through the transition in a respectful and professional manner.

Q | You’ve been praised for your ability to motivate other people. What’s your secret?

Q | What’s one thing you’re going to take away from your time in Minnesota?

A | I could never summarize one thing to take away from my time in Minnesota. Minnesota is in my heart. … We’ve become part of the fabric of this community, and we’ll remain that. It’s been a blessing. People here in the Twin Cities are smart. They’re great businesspeople. They’re authentic. They believe in giving to the community.

Q | During your tenure with the Vikings, you hired four women to executive roles. You’ve also served on an NFL committee on workplace diversity. What does diversity mean to you, and why is it important in the business of sports?

A | It’s important to create an environment that allows everyone—regardless of their race, color, creed, ethnicity, sexual orientation, religious beliefs, or political beliefs—to come and be able to be the best person that they can be. That’s what diversity means—it’s creating that environment. It also means empowerment.

Q | Who are some of your role models locally?

A | Minnesota Vikings fans are really my role models. They’re loyal. They’re dedicated. They’re hard-working people. They really epitomize what it means to be a solid individual.