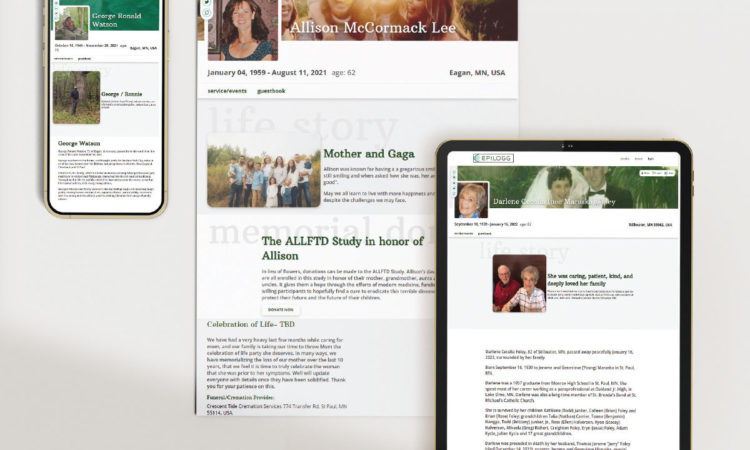 The founders of Epilogg believe there’s a better way to share stories when a loved one dies.
By Allison Kaplan
June 27, 2022

Mary McGreevy’s mother-in-law thought of everything—she even pre-wrote her own obituary. “She was a great storyteller,” McGreevy says. Price to place those parting words in the local newspaper? $1,200.

“I started thinking, ‘Why are we beholden to this old-fashioned industry?’” she asks. The same way The Knot gave brides a place to talk about weddings and CaringBridge makes it easy to update friends and family about a health challenge, McGreevy wanted to create a space for sharing news of a recent death and memorializing the person’s life. “Everyone should have a free place, using simple technology, to tell their loved one’s story.”

She describes her year-old digital platform, Epilogg.com, as “the next chapter in obituaries.” There’s no cost to set up a page and no limit to what users can post: photos, stories, event and donation information, even bits of family lore, like favorite recipes. An Epilogg is easy to share over social media, and authors can add to their writeup after it goes online. By building an audience, Epilogg has attracted affiliate sales from florists, support gifts, memorial trees. Epilogg takes a small portion of memorial donations.

McGreevy, a video producer who previously worked as executive director of a health care clinic, assembled a top-notch team of co-founders: her husband Ernest Grumbles, a startup/IP attorney; Greg McGee, an innovation leader at UnitedHealthcare; and Toby Pearson, who works in health law. They raised nearly $500,000 to launch Epilogg online in 2021 and are working on a second equity round.

The founders brought on former KARE 11 TV news director Jane Helmke as president. One of Helmke’s focus areas is media partnerships, particularly with radio and television stations, which have long been shut out of the newspaper-dominated obituary business. “Now more than ever, we have news deserts in areas of the country,” Helmke says. “If a relative dies in International Falls, where is an obituary even going to be printed? We’re partnering with media outlets to fill some voids.” Epilogg plugs into media sites with a targeted widget that serves up listings for a geographic area. They can do the same for funeral homes, posting the Epilogg listings of clients.

Current media partnerships stretch across Minnesota and into the Dakotas. Epilogg plans to expand nationwide. “Our goal is to change the whole vernacular around sharing tributes and life stories,” McGreevy says. “One day we’ll be asking ‘Have you done your Epilogg?’ rather than an obit.”