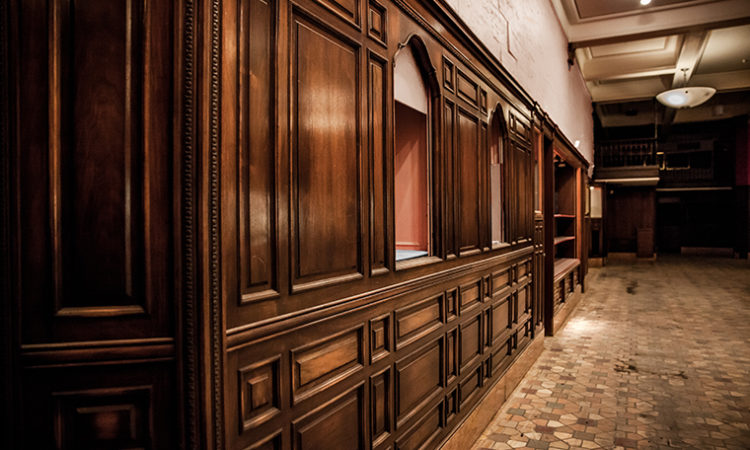 Developers of The Dayton’s Project in downtown Minneapolis are hoping to lure a unique restaurant to the former JB Hudson Jewelers space in the former Dayton’s/Marshall Field’s/Macy’s department store. That’s no surprise: it’s been part of the plan all along.

But Jesseka Doherty, vice president of leasing for Mid-America Real Estate-Minnesota, says that after historic review it’s become clearer what the guidelines will be for someone leasing the space.

“The way the space is today is how it needs to remain,” she says.

The development team worked with the Minnesota State Historic Preservation Office and the National Park Service to get the property listed on the National Register of Historic Places. That allows developers access to historic tax credits, which can be an important source of equity for overhauling vintage properties.

Though there are few windows, the space includes wrought-iron gates, stone and marble staircases, and vintage jewelry cases. Doherty hopes that those can be assets for the right concept.

Doherty says that the leasing team is hoping to attract “a steakhouse, a speakeasy, something unique.” Mid-America Real Estate-Minnesota is handling the leasing of the retail space in the Dayton’s Project.

The restaurant space is about 8,500 square feet. Doherty says that there’s roughly 225,000 square feet of total retail space throughout the project. Beyond plans for a 40,000-square-foot food hall, no other leases have been announced.

Kitty-corner from the JB Hudson space, a new steakhouse is slated to open this fall in the former Barnes & Noble bookstore.

The Dayton’s Project is currently set to open in spring 2020.

New York-based 601w Companies acquired the 12-story building for $59 million in 2017. Minneapolis-based United Properties and Chicago-based Telos Group are also part of the development team. In broad strokes, the concept has been for a mixed-use project combining approximately 750,000 square feet of office space with the retail components.

JB Hudson Jewelers has a longer history than Dayton’s in downtown Minneapolis. The business started in 1885 in its first shop at 230 Nicollet Avenue. JB Hudson moved into the Dayton’s building in 1929 when it was purchased by the Dayton Co. It is now owned by the Pohlad family. JB Hudson moved a block down the street to the Young Quinlan Building in 2007.