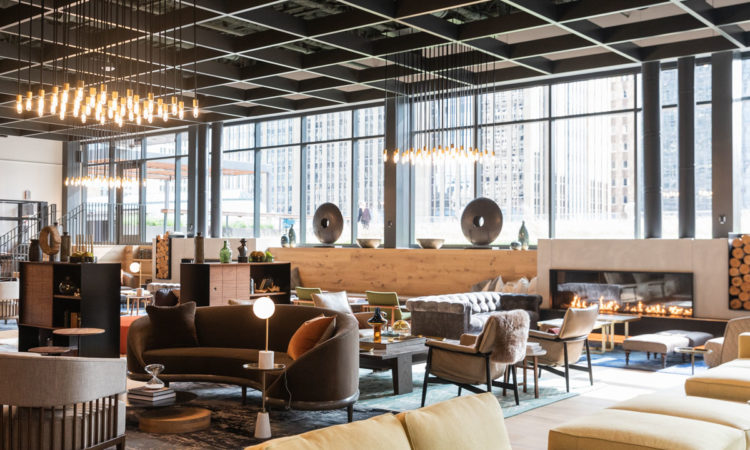 The “winter lounge” of the Dayton’s Project connects to the rooftop terrace. Photo by Caitlin Abrams

London-based consumer goods company Unilever has signed a lease for an office on the building’s eighth floor. About 700,000 square feet of open office space remain.
By Dan Niepow
February 28, 2022

Another U.K.-based company is setting up an office in the Dayton’s Project in downtown Minneapolis.

On Monday, the Dayton’s Project announced that London-based consumer goods giant Unilever has signed a lease for a 13,445-square-foot office on the eighth floor of the building. It’s the third office lease for the project, which has been on the hunt for office tenants for years.

In an email, a spokeswoman for the project said the lease is “long term,” though she wasn’t able to share other details about the agreement.

For what it’s worth, Unilever already had an office in downtown Minneapolis, so the new lease is more of a reshuffling than a resurgence in the area. But Dayton’s Project leaders are no less bullish on the future of downtown. “This new lease shows a great sign for downtown Minneapolis,” said Jim Montez, VP of agency leasing with Transwestern, which represented the Dayton’s Project in the deal. “Companies are interested in coming back, and The Dayton’s Project is the perfect space to bring your people to. The recent redevelopment has provided tenants with rare outdoor space, a luxury gym, and flexible places to work and meet within the building.”

Dayton’s Project officials have long touted the building’s numerous amenities for tenants. That includes a rooftop deck, library, and — perhaps most importantly — an attached parking garage. Located at 700 Nicollet Mall, the building is also transit accessible. In total, the project’s developers have poured more than $350 million into renovations in the building.

So far, though, those amenities haven’t been enough to attract tenants en masse. In fact, in June of 2021, the project’s developer sued its mezzanine loan holder for failing to attract an agreed-upon number of tenants.

The first three floors of the building are reserved for retail space. The project does not yet have any permanent retail tenants, though it’s been holding a makers space there.

Steve Cramer, president and CEO of the Minneapolis Downtown Council, hailed the news. He conceded that “one building’s gain is another building’s loss.” But “in the current environment, any retention of an office user in the downtown market is a positive thing,” he said.

Cramer said the council isn’t directly helping the Dayton’s Project find tenants, though it had signed onto an amicus brief in support of the project during a legal squabble this summer.