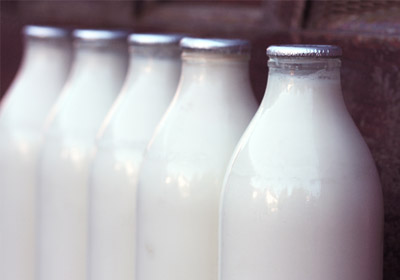 Dairy Industry At Odds Over Limits On Milk Production

A proposed program, called the Dairy Market Stabilization Program, was included in the version of the Farm Bill that the U.S. Senate passed in June. But the dairy processors, represented by the International Dairy Foods Association, said they oppose the program, which was rejected by a majority of House members. Now, the companies are targeting Senators, urging them to strike the program from the final bill.

The “stabilization program” is tied to the so-called Dairy Producer Margin Protection Program, which is essentially an insurance program designed to aid producers if their margins—the difference between milk prices and feed costs—reach a certain threshold.

Producers who enroll in the voluntary insurance program would be subject to the stabilization program, under the terms of the Senate bill. They would be required to temporarily scale back production if the market is oversupplied.

Players from throughout the dairy industry appear to be at odds over the program. The National Milk Producers Federation—which counts among its members Minnesota companies such as Associated Milk Producers, Inc., and Land O'Lakes, Inc.—has voiced support for the Senate bill and the stabilization program. Jerry Kozak, the organization’s president and CEO, has said that eliminating the “cost control mechanism” from the Farm Bill would greatly increase government and taxpayer costs.

Kozak called the House version “seriously flawed” and said that processors “stand to benefit by creating a surplus of milk that puts farm families out of business.”

The processors, meanwhile, say the program would stunt industry growth and add unnecessary regulatory burden. They recently sent letters to U.S. Senators encouraging them to reject the stabilization program.

A letter addressed to Minnesota Senator Amy Klobuchar was signed by Jon Davis, president and CEO of Davisco Foods, which is one of Minnesota’s 20 largest private companies. The letter was also signed by Corrinne Colombo Reed, Dairy Queen’s vice president of dairy products, and by the leaders of local operations for The Kroger Company; Nestle USA, Inc.; Dean Foods Company; Saputo, Inc.; and Kraft Foods Group, Inc.

The processors contend that they are not alone in opposing the program. In their letter, they said that the Minnesota Milk Producers Association actually opposes it, as do “retailers, restaurants, and consumers across the state.”

The Minnesota Milk Producers Association states on its website that it “does not support any of the existing supply management programs currently proposed.” A press release issued last month indicates that the Minnesota Grocers Association also opposes the stabilization program.

“Dairy farmers who take advantage of the margin insurance should not be required to participate in a program that would have the government directly interfere in the milk supply,” leaders from the dairy processing industry wrote in their letter to Klobuchar. “Limiting the milk supply will discourage further investment and growth in our industry and will impose additional and unnecessary regulations on our businesses.”

The full letter to Klobuchar can be accessed here. Similar letters were sent to senators from other states.