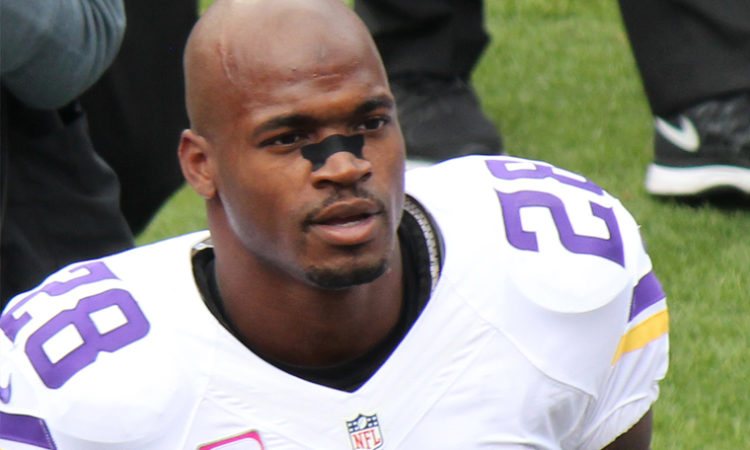 Adrian Peterson in 2015 when he played for the Minnesota Vikings. ( Photo by Jeffrey Beall/CC)

A Hennepin County court judge has ordered former Minnesota Vikings running back Adrian Peterson to repay upwards of $600,000 to cover money he borrowed in 2016 from Edina-based Crown Bank.

Back in May 2016, Peterson borrowed $2.4 million — at a 7.5 percent interest rate — from Crown Bank in order to refinance previous debts, reported the Star Tribune.

Peterson, who’d put up his contract as collateral for the loan, subsequently injured his knee early in the 2016-17 National Football League season and defaulted on the loan later that year in October.

Peterson had paid most of the loan back — about $1.9 million worth — and agreed to grant the bank a second mortgage on his Eden Prairie home. However, a title investigation found that the property was already tied to two mortgages, which exceeded the value of the property.

Now, a Hennepin County judge has ruled Peterson must forfeit an additional $609,786 to Crown Bank, as well as cover the nearly $29,000 in legal fees the bank accrued in filing the suit.

Over his 11-year career, Peterson has made nearly $100 million. In September 2011, he signed a contract extension with the Minnesota Vikings guaranteeing him $36 million and as much as $100 million over seven years if he stayed with the team that long. After leaving the team before the end of his contract, he jumped to the New Orleans Saints last season and inked a two-year, $7 million deal. Shortly into the year, he was traded to the Arizona Cardinals where his season ended early with a neck injury.