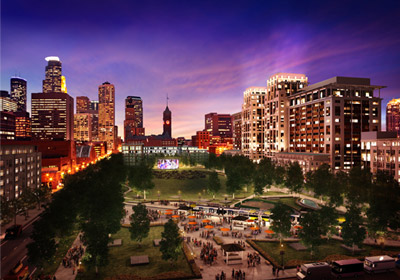 Could A Lawsuit Sink The $400M Downtown East Plan?

A group including former Minneapolis mayoral candidates recently filed a lawsuit challenging the proposed $400 million Downtown East redevelopment project, and a judge heard arguments regarding the suit on Thursday, one day before the Minneapolis City Council is scheduled to vote on the massive development plan.

The lawsuit, which can be viewed here, was filed by Stephanie Woodruff, vice chair of the city’s audit committee and a former Minneapolis mayoral candidate; Dan Cohen, a former city council president who also ran for mayor; and Paul Ostrow, another former president of the Minneapolis City Council.

The city council is expected to take up the Downtown East project on Friday, but an emergency court hearing was held Thursday morning, in response to the last-minute lawsuit.

The Pioneer Press reported on the recently filed legal action, which alleges that the city’s plan to issue up to $65 million in municipal bonds to fund part of the project would violate legislation tied to the Minnesota Vikings’ public funding. The stadium bill capped the city’s payments toward “stadium infrastructure” at $150 million, but the suit claims portions of the Downtown East project fall under that definition and would push the city’s funding beyond the $150 million maximum.

The Star Tribune, meanwhile, said Thursday that it remained unclear when a judge might rule on the lawsuit, which seeks an injunction. City attorney Susan Segal reportedly said that the judge planned to wait until the city council had voted, and possibly issue a ruling next week. Segal has reportedly also said that a delay would likely sink the deal.