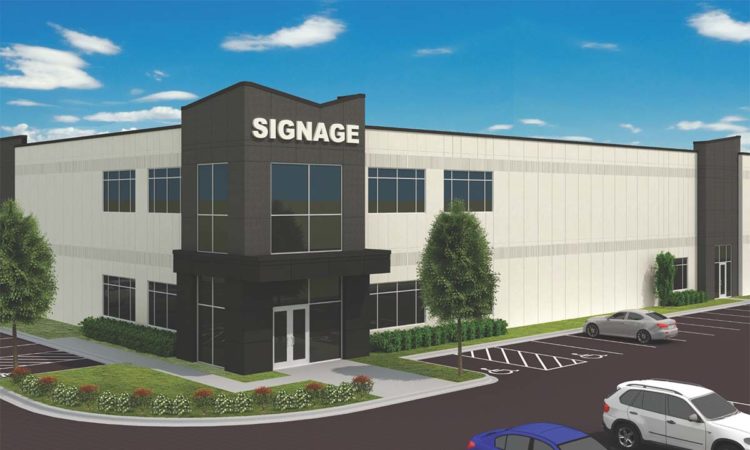 The new facility will be located directly off the Interstate 694 and County Road 14 interchange in Oakdale. Courtesy of United Properties

At 199,919 square feet, the 4Front Industrial Park covers a comparatively large swath of land in the St. Paul suburb.
By Winter Keefer
July 28, 2022

United Properties has broken ground on its new 199,919-square-foot industrial building in Oakdale, a space project leaders say is unique and will serve as the “premier industrial campus of the east metro.”

But what makes this particular development unique?

Scott Peterson, vice president of hospitality and office development with United Properties, says it comes down to three main factors: the size of the land, the fact that it’s anchored by a previously existing campus, and the structure of the partnership that makes the project possible.

He said the new development will provide “amenities to not only the tenants of this building but also to the community of Oakdale in general. And upon the buildout, we really think this is one of the most premier campuses in the east metro.”

The development, dubbed the 4Front Industrial Park and located directly off the Interstate 694 and County Road 14 interchange, will offer suites that range in size from 30,000 square feet to the full 199,919 square feet. Sitting on 12 acres with 284 parking stalls for visitors and employees, the building will also provide 21 dock doors with levelers and three oversized drive-in doors, with the ability to add additional doors by tenant request.

4Front Industrial Park will contribute to a growing number of industrial spaces in the Twin Cities and metro area.

The Minneapolis-St. Paul industrial market has nearly 4.2 million square feet under construction, according to recent JLL research. JLL industrial team will oversee leasing for the project.

The area is not a standalone parcel, he noted. Rather, it is part of a larger campus that once housed the headquarters of Imation, a 1996 spinoff from 3M that moved its headquarters out of state in 2016 after selling its Oakdale headquarters to Slumberland Inc. for $11.5 million.

Peterson called the groundbreaking of the industrial space “phase one.” The second phase will include the development of retail space on nine acres of the property’s land. Details are not yet available on this portion of the development, Peterson said. However, United Properties plans to submit site plans by the end of the year and break ground next year.

“The demand for industrial space in the Twin Cities region has not slowed down in the least and this is just one of the numerous projects United Properties is developing to answer that demand,” JLL’s Managing Director Chris Hickok said in a news release announcing the groundbreaking. “The accessibility of 4Front Industrial Park is superior and its location is prime for medical, manufacturing and warehouse uses.”