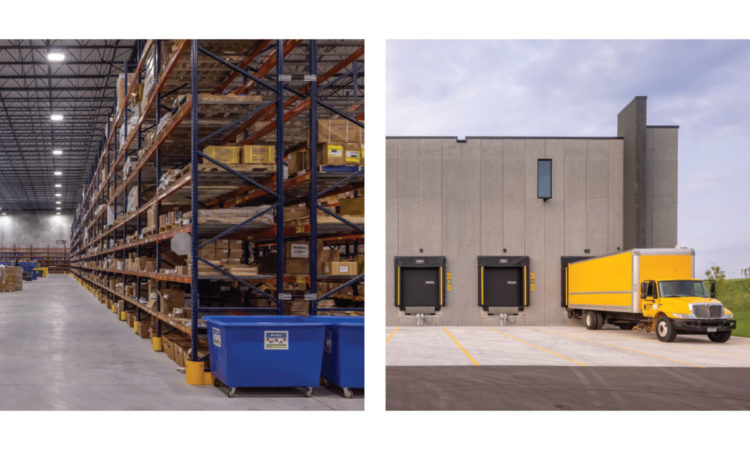 Developers are building warehouse and manufacturing facilities in the Twin Cities as fast as they can.
By Gene Rebeck
April 27, 2022

When you think of construction projects within the city limits of Minneapolis and St. Paul, you probably picture condos and rental apartments. In a word, residential.

But the project going up at University Avenue and 37th Avenue Northeast in Minneapolis is a different animal. Minnetonka-based Opus Group has started work on a 130,440-square-foot building designed to accommodate industrial businesses, a category that includes manufacturing and distribution. What Opus is calling Nordeast Business Center is scheduled to be completed in July.

To be sure, it’s not an odd location for an industrial development. Just to the south is Mid-Continent Engineering, a specialty manufacturing company. The property itself was once occupied by a Cargill linseed oil plant served by a Soo Line rail spur. The plant was razed in the early 1970s, and the land’s ownership was taken over by Hennepin County and Canadian Pacific Railroad before being acquired by Opus last year.

The appeal of this location is “the concentration of available labor” nearby, according to Opus vice president and general manager Phil Cattanach, who is responsible for all development activities in Minnesota and Iowa, including Nordeast Business Center.

It’s a project that reflects several trends in the Twin Cities industrial development market. Demand for industrial spaces is intense—and that demand includes both high-density urban locations as well as wide-open spaces in exurbia. Nordeast Business Center also is being designed not to look “industrial,” with bright blue panels and plenty of glass to let in natural light. And like many industrial construction projects these days, it’s being built on spec, following the Field of Dreams mantra of “If you build it, they will come.”

Most likely, the space will get snapped up. In the past couple of years, industrial buildings have had little trouble filling their square footage. While Covid has put the kibosh on most new office and retail projects, Twin Cities-area industrial development has been feverishly active. And that’s because of the pandemic, not in spite of it.

“We have the most active [industrial] market we’ve ever had,” says John Ryden, a senior vice president at the Minneapolis office of Dallas-based real estate brokerage CBRE, who works exclusively with industrial properties. “And I think that’s happening pretty much around the country.”

One of the forces behind this is, of course, e-commerce, as people increasingly buy online rather than in person. That requires more warehouse space so that online retailers can deliver products to households as quickly as possible. Though e-commerce was certainly growing before the pandemic, “Covid really accelerated that,” Ryden notes.

When the pandemic hit, “we just realized how much and how quickly we need things,” says Brent Masica, executive director at the Twin Cities office of Chicago-based real estate services firm Cushman & Wakefield. “To get things quicker, you need warehouses. And to get things, you need to make them.” Manufacturing plants “never really shut down—and they’ve grown because the demand has grown.”

At the same time, Masica adds, the ability to get goods here has been more challenging, whether those products are sourced domestically or overseas. “Those delays have caused companies to get more

when they can,” he says. “And when they can get more, they have to store it somewhere. They can’t sit and wait 18 to 24 weeks to get their product. We’re all living through supply chain issues, but they’re trying to limit those issues.”

These trends “are driving absorption of industrial product [spaces] to record levels,” Ryden says. They’re also encouraging construction of industrial structures that are larger than the Twin Cities’ historical standard.

In general, new industrial buildings in the Twin Cities market tend to fall in the ranges of 120,000 to 200,000 square feet and 28- to 32-foot clear. (“Clear” is developer shorthand for the height of the building’s interior space.) Those dimensions are small relative to buildings in more geographically central distribution hubs, where structures with up to 1 million square feet and clear heights of 36 and even 40 feet have become common.

“Those kinds of buildings have been built in larger distribution markets over the years—Chicago, Atlanta, the Inland Empire in California,” Ryden notes. “We never built those because we were an end-of-the-line distribution center for the five-state area.”

That familiar profile may be changing. Amazon, of course, has built several large facilities in recent years, including a 750,000-square-foot warehouse in Lakeville, which was completed last year. Developers are currently looking to build large facilities in the metro area on spec.

One is Toronto-based WPT Industrial REIT, which has plans to construct a 500,000-square-foot building in Shakopee, and this spring Chicago-based developer CRG is breaking ground on an industrial project that will include a 1,006,880-square-foot, 40-foot-clear facility in Dayton called the Cubes at French Lake. When completed later this year or early next year, it will be Minnesota’s largest speculative industrial structure.

The Cubes at French Lake is the first Twin Cities-area project for CRG, which operates in more than 20 metropolitan regions nationwide. “We looked around to see where we thought opportunities existed,” says CRG senior vice president and Midwest region partner Jeff Lanaghan. “The Twin Cities jumped out at us as a market that had fairly high demand for large-box tenants without anyone addressing that need.”

A Hard Look at Minnesota Hospital Finances
From Enduring to Adapting
Downtown Minneapolis Is Still Growing. Where Precisely Are People Moving?
Will Women Win in Hybrid Workplaces?

Though Lanaghan says the Cubes at French Lake is being marketed as a distribution building, it’s flexible enough to accommodate light manufacturing and offices. “We make [CRG projects] as vanilla as possible and allow the tenants to add their sprinkles,” he says, adding that he “would not be surprised to see it go to a single tenant. Ideally, this building divides very neatly into two.” By early March, the project hadn’t signed up any tenants, but he says CRG has received inquiries, “so we’re certainly optimistic.”

How quickly could such a massive project be absorbed in the marketplace? Brandon Champeau, senior vice president and commercial development and market leader for Minneapolis-based real estate investor and developer United Properties, notes that his firm has built a couple of 300,000-square-foot distribution facilities in recent years. “Honestly, they’ve been the slowest to lease,” even though they’re well-located buildings, he says.

Consequently, United often splits up these large spaces into smaller spaces such as 125,000 and 150,000 square feet. “There’s a lot of demand from smaller tenants, though most of the focus is on the bigger players, which I think our market is still adjusting to,” Champeau says. United has leased more than 1 million square feet of industrial space in the past 18 months.

CBRE’s Ryden says demand for manufacturing facilities also is growing, though not as intensely as that for warehouse space. He notes that some manufacturers have expanded their production and inventory space so that they don’t have to wait for deliveries from overseas.

Ryden cites Glamos Wire, which manufactures plant supports and other gardening supplies. In July 2020, the company wanted to onshore more of its production, so it moved into a 140,551-square-foot facility in Lino Lakes. It now has a footprint that’s three times larger than its previous Hugo location.

The pandemic didn’t derail many manufacturing projects that were poised to break ground before Covid forced many retail and office operations to shut down. Opus, for instance, went ahead with a 266,000-square-foot build-to-suit facility in Owatonna for German automotive components maker Bosch. It combines distribution and light assembly.

When Cherne Industries, which manufactures products for waterworks and plumbing applications, outgrew its 60,000-square-foot facility in Edina, Opus developed a new headquarters in Shakopee that more than doubled Cherne’s previous facility.

These projects were created for specific clients. But in the past couple of years, numerous industrial projects are being developed with no specific tenants in place.

The high demand is one chief reason for so much speculative development, Masica says. “Drive around and you can’t help but notice all the new buildings popping up.” If you’re a developer that isn’t building, he adds, “you’re not going to get the tenants. And if you have it ready, you will get good activity and attract larger tenants. You can’t wait 18 to 24 months,” the time it’s taking to construct a building.

That’s why building on spec isn’t necessarily risky. “Most tenants, when they realize they need the space, don’t have the luxury of waiting for new construction,” Opus’ Cattanach says. Often, 18 to 24 months is way too long. They need buildings now.

Construction lead times have been stretched for the same reason so much warehouse space is being built and absorbed: supply chain problems. Orders for steel, precast concrete panels, and other components are “out a year right now,” Masica says. The shortage of construction labor has, of course, further lengthened the time needed to complete a new building.

When discussing the current industrial development boom, brokers and developers often cite the variety of sizes and locations of projects. This reflects tenants’ diverse needs. While bigger projects typically are being built in the outer-ring suburbs, where land is more plentiful, there’s also demand for facilities closer to the core cities.

This summer, United Properties will break ground on a project at Highway 55 and Douglas Drive in Golden Valley. The Golden Valley Business Center will replace a structure that formerly housed UnitedHealth’s Optum unit. Though not particularly old, the Optum space was built “for what tenants needed in the 1980s and ’90s,” United’s Champeau says. In its place, United will build two structures with square footages of 182,000 and 217,000 that can provide a mix of distribution and manufacturing space.

“We’ve received a lot of attention on the project already,” Champeau says. “And it’s been across the board, including manufacturing tenants, medtech tenants, and a pharmaceutical company. I think that’s because of where it is. It’s a rare opportunity for a 28- and 32-foot-clear product just 5 miles from downtown Minneapolis.”

What’s also remarkable about the project is its nonindustrial location. United Properties worked with Golden Valley to get the site rezoned for industrial development. There’s evidence that suburban cities that may have rejected industrial projects in the past are becoming more open to them.

One reason is that few other types of developments are being proposed. “There are a lot of good jobs that go with these manufacturing and distribution facilities,” Cushman & Wakefield’s Masica says. Many warehouses, he notes, are paying $18 to $24 per hour, with benefits.

These facilities often have office components that house sales, accounting, and other nonproduction functions. In the Twin Cities, one of the most prominent manufacturing sectors is medtech, whose head counts include highly trained, highly compensated scientists and researchers. What’s more, Masica adds, “you can make industrial buildings look pretty nice, with glass and varying colors,” and meet suburban cities’ architectural requirements.

Indeed, industrial facilities may be required to look nice.
Cattanach says the hypercompetitive battle for employees “has absolutely started to influence what we’re seeing in industrial.” Potential employees, particularly those with in-demand skills, have more choices for employment. As a result, he adds, industrial facilities need to be more welcoming, with more daylight and higher ceilings.

These days, industrial tenants can find those welcome mats all over the metro.