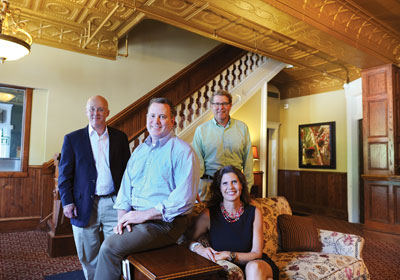 “I truly believe we need to give back to our community where we work and live,” he says. And this kind of giving back can pay both economic and communal dividends for a smaller city. Founded in 2008, though its roots date back to 1982, Rebound Enterprises invests in financial service and banking firms, manufacturing companies, real estate, and community service organizations. It specializes in supporting emerging companies and provides turnaround management for struggling companies. Rebound Enterprises’ current turnaround portfolio includes Northfield Automation Systems and another Northfield manufacturer, NTFE-America.

Reese’s involvement with the Archer House began in 1997 when he and several other local partners purchased the inn after the death of its previous owner. By 2009, Reese was the Archer House’s sole owner, and he saw that the old hotel needed a serious upgrade. It was then that he hit upon creating a business model for investors to acquire, renovate, and manage similar properties throughout the Upper Midwest. Reese believes that such hotels could help strengthen smaller-city downtowns as tourist destinations, which in turn would help those cities’ overall business environments.

Historic inns like the Archer typically have 20 to 40 rooms, which make them too small to attract the attention even of those hotel companies that invest in historic hostelries. Plus, “it’s difficult for the sole proprietor,” Reese notes. “It takes capital to keep these inns maintained. We were able to find this niche and believe we have the industry experience, in both hospitality and business, to be successful in the marketplace.”

To oversee the Archer House’s $1.1 million renovation, Rebound hired Todd Byhre, with 25 years of hospitality industry experience, as the inn’s general manager. (Byhre also is director of operations for Rebound Hospitality.) The 21-month restoration began on the main levels with the basic infrastructure and public spaces, then built its way up to the four-story inn’s 36 guest rooms and suites. The renovation was largely completed this summer.

“The Archer House is one of Northfield’s iconic buildings,” notes Ross Currier, executive director of the Northfield Downtown Development Corporation. “It’s not only historic, but at least by Northfield’s standards, it’s a very large building, with a significant visual presence in our downtown.”

Currier adds that “sometimes, achieving community economic development requires investments that offer considerable risk with, at best, uncertain returns. Having an investor who weighs his investments with both his mind and his heart is a critical piece for success. Brett Reese is locally born and raised, and his heart gives his mind the confidence that he, his team, and the community will make the numbers work.”

This spring, Rebound Enterprises hired Chuck Paton as president of Rebound Hospitality. Paton served as general manager for two distinctive hostelries in the Twin Cities, the Nicollet Island Inn in Minneapolis and the Saint Paul Hotel. “People seek out these places when traveling because they offer a distinct historic and cultural setting,” he says. “And that experience speaks for itself as well as the community in which it is immersed.”

In addition to the Archer House, Rebound Hospitality has acquired the Hotel Winneshiek in Decorah, Iowa, and Lost Lake Lodge near Nisswa. In July, Rebound signed a letter of intent to purchase the Anderson House in Wabasha, the state’s oldest extant hotel, which has been closed since mid-2009. Rebound’s hospitality division plans to create a portfolio of 10 to 15 historic boutique inns and distinct properties over the next five to seven years.

“The goal is to invest in the community and revitalize downtowns,” Byhre says. “It’s the history, the restoration, and the community building that we’re undertaking.”