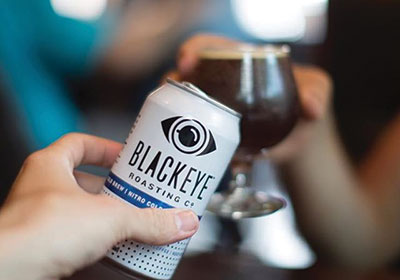 The newest frontier in the coffee wars is cold press, a term with which you’re now probably familiar. Also known as “cold brew,” the coffee is steeped in cold water, providing a less acidic flavor than hot-brew coffee. With cold brew’s growing presence in Minnesota, local coffee shops are seeking to turn the beverage into a year-round habit in the cold, cold north.

Another way coffee shops are serving cold brew is on tap where nitrogen is added, creating a smoother, creamier product. Dunn Brothers and Seattle-based Starbucks have added nitro options to several of their stores in the last year.

“Cold-press coffee has been on the rise in popularity,” says Brecher. “Nitro cold brew is on the same track.”

Cold press represents half to two-thirds of coffee sales (depending on season) for Minneapolis-based coffee roaster Blackeye Roasting Co. Founded in 2013, it operates opened retail locations designed much like a taproom, with 10 tap lines including nitro cold brew, plus a selection of espresso-based beverages, nitro iced tea and kombucha. Blackeye’s office distribution arm currently provides cold-press taps to 20 Minnesota companies.

Cold-brew coffee’s main competition isn’t traditional coffee, but rather energy drinks, according to Blackeye president and founder, Matt McGinn. Blackeye’s cold brew has twice as much caffeine as a traditional energy drink, and it has no sugar. “Consumers really want a drink that isn’t loaded with sugar, says McGinn. “That’s why you see soda companies investing in coffee and tea products.”