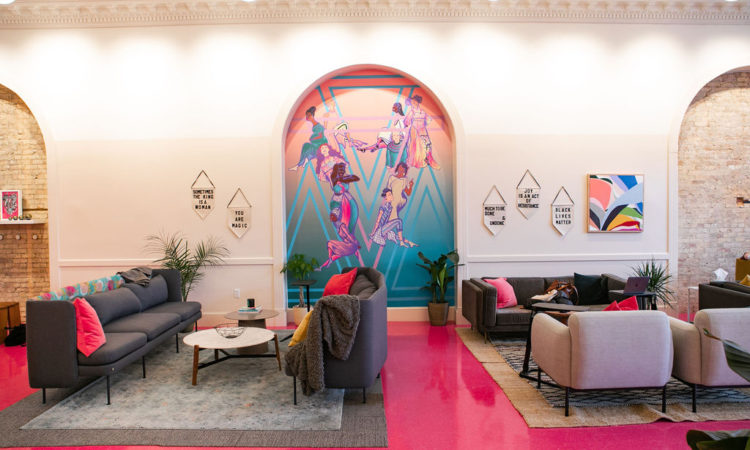 The co-working industry has taken a hit from the pandemic, but local operators are working hard to reopen.
By Kait Ecker
June 19, 2020

Working from home may be losing its appeal after a few months of remote operations, which is something co-working spaces are banking on as the pandemic continues. Many local operations including Industrious, Modernwell, The Coven, and WeWork have begun phased reopenings to more members. Some spaces like Life Time Work have remained open for members in fields considered essential.

To prepare for reopening, the furniture is getting rearranged, the sanitizer is set out, and co-working leaders are innovating new ways to make people feel safe and comfortable in their spaces again.

After closing its doors in March, The Coven opened up a virtual membership, gaining 500 virtual members and hosting over 100 online events within the past few months, said co-founder Alex West Steinman.

“What we’re really interested in doing is creating physical and psychological safety, which means that workspace design is No. 1 in this. How do you create a space where people feel seen, validated, and heard, and also safe, clean and healthy?” she said. “We want to be really thoughtful and measured in our approach at reopening.”

“People will pre-register when they come into our space and reserve a specific spot that they can have for the day to minimize the rotating nature of our desks and our seats,” Steinman said.

The Coven is also using lights on desks that members can indicate whether or not they are open to being bothered by setting it to green or red.

“There’s a lot that we’re putting into this and that we’re learning, working directly with state officials, as well as working as a community of co-working spaces,” she said. “We are imagining a new experience for the physical space and prioritizing the connectivity that people have made virtually.”

While most of The Coven’s annual memberships are renewed and paid in the first quarter of the year, members are being offered extra months on the backend of their memberships to compensate for the time the physical space has been closed. But many of the members have said they’ll just keep their membership as is, which Steinman said is quite helpful.

“Our monthly members have been put on hold for every month that we’ve been closed, and we anticipate most of them coming back,” she said. “We have not seen a steep drop off in numbers.”

When The Coven announced its reopening plans, the response from its members was largely positive.

“For co-working spaces, what it comes down to is being really transparent about what you’re doing, how you’re supporting folks, what you need members to do, and how you want to get feedback from them,” Steinman said.

Some other co-working spaces are not as focused on shared spaces, which simplifies the phased reopenings. Life Time Work is set up with 75 percent of its space already being dedicated, with the remaining 25 percent being shared. In those shared spaces, half of the task seating has been removed to help people maintain physical distance, said James O’Reilly, president of Life Time Work.

“We won’t be forcing people to stay in one area. I think we will staff appropriately and help direct people to work in a safe manner,” O’Reilly said. “What we have been observing so far from the people who’ve opted in is that people are taking this thing very seriously and they are practicing extreme caution in the workspace.”

The safety protocols will remain until a vaccine is available, he said, although he thinks there will be a stabilization of co-working over the summer, with some normalization in the fall.

“Co-working as a whole expanded very aggressively prior to this slow down. And I think most of it has been focused in areas like dense urban centers. Those urban centers’ office space options––not just co-working space–– are going to see a drop, and that’s just because people will be more efficient with their consumption of office space,” O’Reilly said.

Going forward, he thinks there will be a greater demand for co-working locations closer to where people live, because he doesn’t see people being satisfied working from home on a long-term basis. While wearing pajama pants and working from the sofa may have been novel for the first few works of working from home, people crave the structure of a professional environment.

“I think they will want a formal office space to go to,” O’Reilly said.

He also sees new office construction slowing down, and the excess being absorbed over the next several years as well. Pre-pandemic, Life Time was in the process of developing a co-working space in downtown Minneapolis, but the company plans to lay off 301 employees, primarily impacting its real estate, construction, and architecture departments.

“My true sense is that people will in time get comfortable and look forward to having that sense of community and that sense of connection to others,” O’Reilly said. “It won’t be immediate. The next couple of years I think are going to be very difficult for most co-working operators, particularly those who over-expanded in dense urban centers, and for whom growth was the number one priority. I think a sustainable business that focuses on just fundamentals, as opposed to purely growth is probably a more long-term viable solution.”

Of course, there will likely be some rough times ahead. Co-working operator The Riveter, for instance, is shutting down all of its operations, including its newly opened location in Minneapolis.

“Even as states begin the untested process of reopening, we—like many other businesses—understand that to protect the health of our communities and colleagues we cannot resume regular operations. With no roadmap for the safe return to shared workspaces or in-person gatherings, our co-working business does not have a path forward,” founder and CEO Amy Nelson wrote in a message to members.

The closures are effective June 30.

ModernWell, meanwhile, plans to gradually reopen with thorough sanitization, limited capacity, and distancing measures. But the company’s revenue has been negatively impacted by the pandemic, said Julie Burton, founder and CEO of ModernWell.

Executing on membership freezes, the organization has been working with members on a case-by-case basis to navigate the situation.

“I’m very, very hopeful, because I absolutely love this ModernWell community and the people. Our members are incredible human beings that work hard and have really meaningful, inspirational businesses, and are very loyal and dedicated to ModernWell,” Burton said. “I’m also realistically aware and mindful of the fact that people are experiencing really difficult times right now. And membership dues are hard.”

While it’s a difficult situation for co-working spaces, Burton remains optimistic for survival of the co-working community in the Twin Cities.

“Anybody who knows me knows that I’m a fighter, and that I really care so deeply for this community and for every single member,” she said. “I’m going to fight for all of us to have a place to come back to when we get through this. So, I’m hopeful. I remain hopeful for our business and for all the co-working spaces.”

One of the larger nationwide co-working chains in town, Industrious, is confident in its position, according to area manager Courtney Shomaker.

“Long before the pandemic we had shifted almost entirely to management agreements. Obviously this offers significantly greater flexibility for both tenants and landlords, with substantially less risk,” she said.

The company hasn’t particularly experienced a drop in membership, she noted.

“We’ve seen our enterprise pipeline double and even triple over the last two months, which really just goes to show where our industry is heading,” Shomaker said. “And I think as a result we’re really well-positioned for growth.”

And while co-working will not be going away, it will just look different post-Covid-19, like many other industries, said Brent Robertson, managing director at the Twin Cities office of JLL, a commercial real estate services firm.

Still, if the pandemic lasts into next year, he predicts that a significant number of co-working places will go under.

“But that doesn’t mean they’re going to go out of business completely,” Robertson said. “Owners are going to say ‘I can do this myself, and I then don’t have to sacrifice the direct relationships with the tenants and own it.’ At JLL we’re actually helping a number of owners around the country do that.”

It’s the difference between an ownership and management model, he said.

“The management model simply takes a fee to do the work as opposed to taking ownership and signing a long-term lease,” Robertson said.

Moving forward, he sees co-working filling a niche that’s not going anywhere, even in a post-pandemic world. There will be redesign and an emphasis on de-densification for flexibility if another pandemic occurs.

“Co-working has been around for decades. And it’s historically struggled with rent arbitration dynamic and economic downturns,” he said. “Short term, they’re going to have to figure out how to provide a working environment in a socially distanced manner, which is difficult the way they’re laid out. Long term, co-working is not going to go away completely, and once we get a vaccine, I think we’re going to see it go back to what it was pre-Covid. But in interim, it’s going to be difficult.” 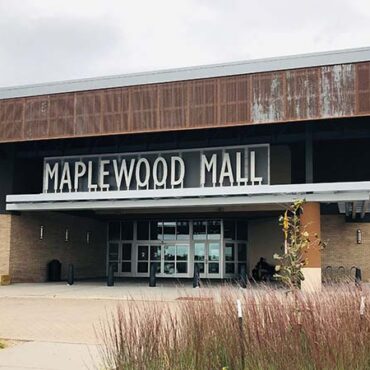 Why Maplewood Mall Is No Longer Up For Auction