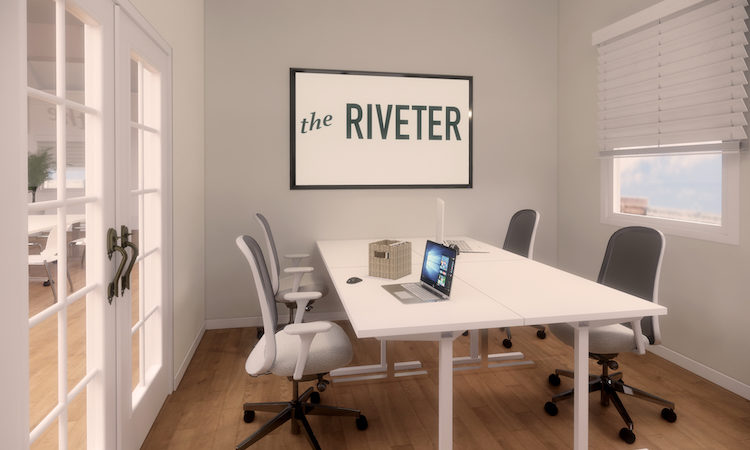 The Riveter in Edina is located at 44th and France on the second floor of the Durr Ltd. building, which was previously Evereve headquarters.

The Riveter Founder on Co-Working, Community, and Her Minneapolis Expansion

A conversation with Amy Nelson, founder of the Seattle-based co-working community, which is in national expansion mode, including this week’s opening at 44th and France.
By Allison Kaplan
June 19, 2019

The Riveter, a Seattle-based co-working community, marks its grand opening this week in Edina, at the corner of 44th and France on the border of Linden Hills. It’s part of a national growth strategy for the co-working company, fueled by a recent $15 million Series A funding round and centered around building networks for professional women. Founded just two years ago, The Riveter now has eight locations and 2,000 members across the country.

Whitney in Minneapolis early in her career as an attorney. Her husband is a Minnesota native. The couple, now parents to four daughters, moved to Seattle for her husband’s job with Amazon.

Nelson came to town last month in advance of The Riveter’s Edina opening—partly to build momentum, and partly because she was 36 weeks pregnant with her fourth daughter. We had the chance to talk about the future of co-working, as well as the business and community she is building.

The Riveter is already in Los Angeles and you’ve recently added Austin, Dallas, and now Minneapolis. Did you set out to build a national company, and how do you select each city?

I knew I wanted to build around the country. We have two focus areas. The physical spaces are one—we know we want to continue growing across the country. We get emails from Boise, from Columbus, Ohio—where I’m from—saying, “When is the Riveter coming?” Eventually we’ll be there, but we can’t be there very soon. So we’re build a digital platform to bring the work we’re doing online as well.

In terms of where we were going, Minneapolis was always on the list of places we wanted to go immediately after we raised our Series A, along with Austin, Dallas, Portland, and Denver. And then there are a number of cities that we want to go to, but we have to pause and wait for a minute as we scale responsibly.

The explosion of co-working spaces in the Twin Cities, and nationwide, over just the last few years is stunning. Do we really need more?

Co-working is a brand-new industry with so much room to grow. Right now, co-working accounts for 3 to 4 percent of office leases; there are estimates that it will be over 20 percent in the next five years. The way we work has fundamentally changed and you have to build spaces to reflect that new reality.

I thought about starting my own business as solo attorney (in Seattle). I looked at co-working and didn’t see anything for me, a woman in my mid-30s, a mom. I spent a long time as corporate litigator working with men. I thought, if I’m going out on my own, I want an environment more reflective of my own life, and I didn’t see that being provided in way I wanted. So I thought, that’s why I’ll build The Riveter.

Who are your members?

A majority of our members are women over 30. Over half are parents. A lot of people are pivoting into second or third acts. Twenty percent are in the early stages of starting scalable start-ups. The vast majority own small businesses—teams of one to eight, and they’re not looking to scale. There are also people who work remotely for companies in other cities.

But our membership is 30 percent male. On the one hand, that says a lot, that many men identify with what we’re doing. On the other hand, some work for women, some are solo entrepreneurs, or they work remotely and they just like our vibe and our community better. Our spaces feel different, the noise level is different, the aesthetic is different.

Everyone who walks in our door believes the future of work should look different for women somehow. That’s a very strong, binding factor.

Minneapolis already has two locally owned, female-centric co-working communities—Modern Well and The Coven. Where does The Riveter fit in?

Whenever we go somewhere new, we talk to everyone who is there. We purposely do not go near where they are, physically. A lot of co-working is hyper-local. Those groups are amazing, they have great speakers and events as well.

We try to be additive to a community. A big part of what we do to create community is bring in authors, luminaries, we host workshops, we recently started a monthly mom’s meet-up. It’s a network. You’re meeting people who are doing very different things, but have shared experiences. We all have to figure out how to do social media, or make financial projections, to deal with wage gaps and bias in the workplace. We talk about those things.

We look at ourselves like, what are these other national co-working spaces doing. WeWork, industrious—they were all started by men. Why aren’t women playing at that level? Women receive so few of the VC dollars available. It’s really important to me to talk about that funding, and make sure that women receive that funding.

I’ve heard of some companies starting to look at co-working memberships as an employee perk. Is that true at the Riveter?

Microsoft sponsors Riveter memberships for some of its employees. Companies across the country have done that. Businesses have a problem retaining women–we still lose half of women with college degrees (in corporate jobs) after having kids. That’s a stunning amount of women! It kills companies bottom lines, and companies are really starting to grasp that. Retaining people leads to better bottom lines. We are a benefit. A lot of women don’t go to HR when there’s an issue. They don’t think the incentives are aligned. So to have this other community where you’re around professional women and experts coming up with ways to advocate for yourself. That’s huge.

How does the Edina space compare to other Riveter locations?

This is one of the smallest at 7,500 square feet. Our spaces range from 7,500 to 20,000 square feet. But we loved the area and loved the building—the space above Sloane’s Beauty Bar is light filled and has so much character, and great community space. We have six private offices and the rest is open, with dedicated desks or floating spaces.

Our typical floorplan is 30 percent private; 70 percent open. Many co-working spaces are predominantly private offices. We truly want flexible workspace. A lot of our members are part time. I think there’s a lot of value to going somewhere other than a coffee shop where you know you’re going to meet other professionals.

That gets at the community aspect you talk about, which seems challenging for a national brand to establish, especially as you scale.

We really empower people who run the spaces to grow the community there. I’m able to do all of this because of the amazing network I have, and the friendships I have, and the people who’ve supported me. Men’s networks, tend to be really shallow and wide. Women tend to network differently—the science says that, not me. So I think about taking that, and bringing the power of that network to The Riveter.

A lot more like The Riveter. Look at hotels—it’s not a perfect analogy, but hotels have developed so you have these huge chains that are anonymous, but then you have these specialty places you can go to get a certain experience; find a certain community. Co-working, as it grows, will veer more from the WeWork/Industrious model to building around communities, whether creative, or women-centric, I really think that it will segment out. If you get to choose your own work community, wouldn’t that be amazing?