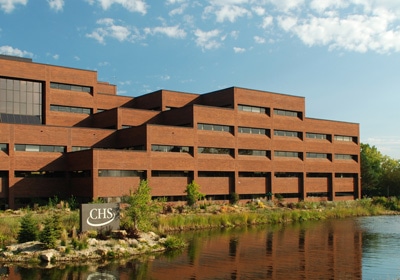 A total of 24,559 Minnesota farmers, ranchers, and cooperatives will share a $116.3 million disbursement—the largest share of the cash distribution among states.
February 14, 2013

CHS, Inc., said Monday that it will distribute a record $600 million to its owners—representing what it says is the largest cash return ever by a U.S. cooperative.

The large payout is based on the Inver Grove Heights-based energy, grains, and food co-op’s record net income of $1.26 billion for the fiscal year that ended August 31, up 31 percent over the prior year.

A total of 24,559 Minnesota farmers, ranchers, and cooperatives will share a $116.3 million disbursement—the largest share of the cash distribution among states.

The states that will receive the largest portion of the disbursement are all in the Midwest, where CHS’ members are most heavily concentrated. North Dakota will receive $103.3 million, the second-largest sum, followed by Wisconsin ($59.1 million), South Dakota ($48.1 million), and Iowa ($49.3 million).

The distribution will begin this month, and the cash will go to nearly 1,200 member cooperatives and nearly 50,000 individual members of CHS. The payments vary based on the amount of business that each farmer or co-op conducted with CHS during the last fiscal year.

CHS is also distributing cash to member cooperatives to redeem equity in the company that they earned in prior years. Throughout 2013, the co-op will redeem equities of eligible individual members and pay quarterly dividends to owners of CHS preferred stock.

“One of the most important ways we help our producer and co-op owners grow is by delivering an economic return on the business they do with us,” CHS Chairman and Silverton, Oregon, farmer David Bielenberg said in a statement. “This—along with the quality energy and crop inputs, crop marketing, and services we provide year-around—underscores the added value of being a cooperative system owner and customer.”

Since 1998, when Cenex and Harvest States co-ops merged to form CHS, it has returned more than $3.1 billion in cash to its owners. Last year, CHS distributed $421 million, setting the previous record.

CHS is the largest revenue-producing co-op in the nation. Revenue for its most recently completed fiscal year totaled $40.6 billion.

For the first quarter that ended November 30, CHS’ net income totaled $345.9 million, down 17.4 percent from the same period the prior year. Meanwhile, first-quarter revenue totaled $11.7 billion. CHS CEO Carl Casale told the Star Tribune that the first-quarter results “would not put us on the same trajectory that we achieved in 2012.”