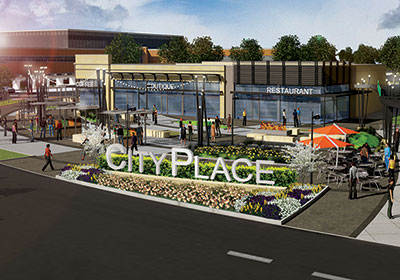 The former State Farm campus in Woodbury has long stood as a symbol of the challenges faced by real estate developers in the wake of the Great Recession.

Insurer State Farm opened the site, home to its regional headquarters, in 1996 but moved out just 10 years later. The 100-acre site at the intersection of Interstate 94 and Radio Drive, anchored by a 400,000-square-foot office building, sat empty throughout the recession. Even as the economy improved, attempts to redevelop the site faltered.

But after nearly a decade of remaining idle, a new owner is overhauling the site—now dubbed CityPlace—with a vision that would add retail and medical office space to the sprawling east metro site.

As it turns out, it took an out-of-state buyer to reenergize the long-moribund site. Aventura, Fla.-based Elion Partners, which formed a joint venture with Minneapolis-based Kraus-Anderson Cos., is leading the redevelopment. The plan calls for adding 300,000 square feet of new construction to the high-profile site.

“Woodbury is such a prime suburb from all of the things that you look for in a metro suburb. This is a prime site right at the entrance to the city—clearly there was unlocked value on the site,” says Juan DeAngulo, managing principal with Elion Partners.

The plans call for 160,00 square feet of retail anchored by a Whole Foods grocery store, a 116-room Marriott Residence Inn hotel, and 80,000 to 100,000 square feet of medical office space. DeAngulo says that they are trying to draw office tenants to the existing building, which is being upgraded with the new elements added to the site.

The site was once pitched as a potential location for a new Minnesota Vikings stadium. Ramsey County acquired the site from the federal government in 2013. As part of the deal, the county’s cleanup costs of $24 million on site are being deducted from the $28 million purchase price.

There’s been redevelopment talk about the site for decades. Although the outlined plans are ambitious, the county’s ownership and continued environmental cleanup of the land mean the site is as close to “shovel-ready” for new development as it’s ever been.

Ramsey County Commissioner Blake Huffman says that the big-picture vision calls for 1,500 to 1,700 units of housing—a mix of apartments, townhomes and single-family homes—in addition to office and retail space.

“We think at the end of the day there’ll be 4,000 jobs out there,” says Huffman, referring to permanent jobs when the site is fully developed.

The eastern side of the site will be dedicated to housing, which will be divided into three distinct neighborhoods. The western side will include office space; retail space will be clustered in the center of the site, and green space will be woven throughout the property.

But Huffman acknowledges that expansive plans won’t take shape over night. He’s expecting that the buildout will take 10 years. Later this year, he says, the county will be ready to start selling land; he hopes that dirt could start moving on the site in 2016.

“As we go to employers,” Huffman says, “their first two questions are ‘Where are our employees going to live and how are they going to get to the site?’ ”

The new store will be owned by Cub’s parent, Eden Prairie-based SuperValu Inc. The site is across the highway from Maplewood Mall.

“This is a corporate Cub—the last ones that they did corporately were right before the fallout in the market,” says Paul Tucci, vice president of development for Oppidan.

Other east metro retail projects of note include the new Twin Cities Premium Outlets mall, which opened in Eagan in August. The Bielenberg Gardens project in Woodbury, which will be anchored by a Jerry’s Foods store, is set to open in the first half of this year.

At the former State Farm campus in Woodbury, DeAngulo is confident that his company’s gamble on the long-vacant site will pay off.

“The different components are attracting some of the large corporate users in the Twin Cities who see it as an interesting opportunity,” says DeAngulo. “We’ve been pleasantly surprised that our expectations were right.”