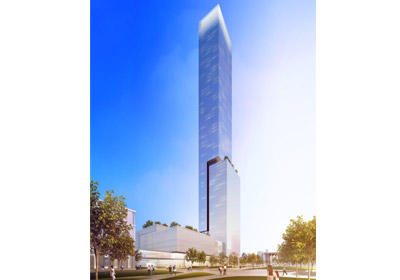 Three other proposals for the Nicollet Hotel block are still under consideration.
February 02, 2015

A proposal for an 80-story tower in downtown Minneapolis—which would be taller than the iconic IDS Center—has generated lots of talk in recent weeks. But on Friday morning, City of Minneapolis planning staff sent an email to Minneapolis-based Duval Development dismissing the plan as “deficient” and indicating that the plan was “no longer in consideration.”

The city drew four responses in December for a request for proposals (RFP) at the Nicollet Hotel Block, located at 30 Third Street South in downtown Minneapolis. The 18-story Nicollet Hotel, which was razed in 1991, once stood on the site. The city has owned the site since 1993, but has struggled to attract redevelopment.

Duval is a newer company, but its ambitious proposal for a tower at the intersection of Hennepin and Washington Avenues prompted the most attention.

Among the concerns cited by the city in its email to Duval:

• It is difficult to determine if Duval Development has the capacity to complete the development.”

• “It is unclear how you will raise the equity shown in the capital pro forma since you did not submit corporate financial statements.”