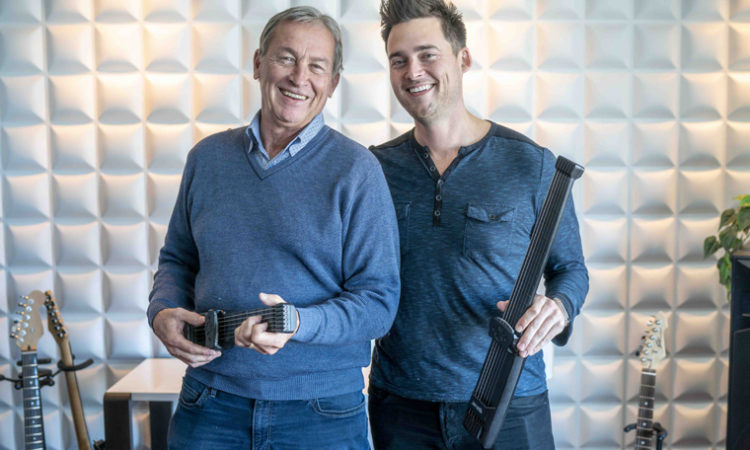 Zivix CEO Ed Cannon with his son Matt, who is the company's director of growth. ( Photo by Finnigan Delahanty/Zivix LLC)

Can Zivix Strike Another Chord with Its Newest Smart Guitar?

The Golden Valley music tech company is once again on track to surpass its crowdfunding goal.
By Kate LeRette
May 02, 2018

The Golden Valley company with one of the best-funded Minnesota-based Kickstarter campaigns in history is returning to the stage—and this time they have two new versions of its flagship smart guitar.

Founded in 2009, Zivix LLC is the music software and technology firm that created Jamstik, a wireless digital guitar about the size of a ukulele. In 2015, Zivix launched a Bluetooth-compatible version of its Jamstik on Kickstarter and made crowdfunding history, far surpassing its $50,000 goal by raising more than $800,000 from nearly 3,000 backers. Even Amazon was impressed: Jamstik was featured on the e-commerce giant’s startup product store, Amazon Launchpad.

A year later Zivix launched a second campaign for AirJamz, a Bluetooth guitar pick that creates a “realistic” air guitar by translating arm movements into music. The campaign surpassed its $30,000 goal by nearly $8,000.

So Zivix is doing it again: On May 2, the music tech company kicked off a campaign on crowdfunding platform Indiegogo with the Jamstik 7 and Jamstik 12. This time around, Zivix is a little more optimistic, setting its goal at $75,000—and they’re already more than three-quarters of the way there.

Zivix piloted a new soft launch feature on Indiegogo for the Jamstik 12, which brought in $58,000 in the week leading up to the campaign, and within the first few hours since the campaign went live, Zivix has raised an additional $4,000.

The two new models address the needs of different audiences: learners, and advanced or professional players. “Catering to two markets was challenging,” says director of growth Matt Cannon. His sister Meredith is Zivix’s brand manager and his father, Ed, is CEO. Ed was an early investor in Zivix before taking the lead role in 2009.

The Jamstik 7 is similar to the 2015 version, but with improved ergonomics and battery life, and more frets (notes), while the Jamstik 12 is rechargeable, longer in length, faster and has more processing power and a denser array of sensors for improved accuracy and a more realistic guitar performance.

“Our main goal with the learner model was to make it more accessible through a lower price point. It’s a great way to teach yourself how to play at your own pace; sensors tell you where your fingers should be,” Matt says. “With the 12, there was a lot of engineering that went into it to appeal to professional guitarists; it’s going to play fast.”

The Jamstik 7 retails for $249; the Jamstik 12 for $499. The plastics are made in Minnesota and the instruments are built in the U.S.

The company doesn’t disclose revenue, but Meredith says Zivix has shipped more than 30,000 Jamstiks to date and has 55 resale locations worldwide. “International sales are growing rapidly and represent approximately 40 percent of [the company’s] sales,” she says. The digital guitars are quite popular in the Pacific Rim and across Europe. “Last year we shipped product to over 70 countries.”

Zivix’s smart guitars are compatible with more than 500 apps, including its own Jamstik+, JamTutor and JamMix. Jamstik+ allows guitarists to play music and change the device to sound like other instruments. JamTutor offers step-by-step lessons, while JamMix allows players to compose their own music.

Zivix’s team consists of 18 employees, half of whom play in local bands. “Our mission,” adds CEO Ed Cannon, “is to create more guitar players and make music more accessible.” 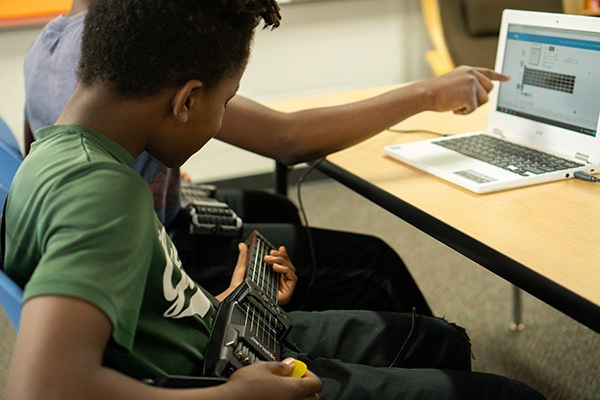