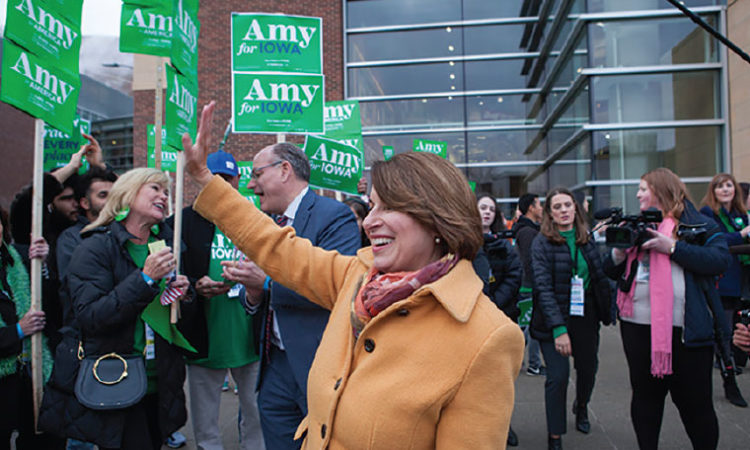 Can We Survive Iowa?

In the caucuses, some state has to be first, and that state should be Iowa.
By Vance Opperman
March 01, 2020

This letter was drafted before the results of the Iowa presidential caucuses. That’s a good thing because there is always a chorus of critics following the caucus results, demanding that Iowa lose its spot at the beginning of the presidential nominating calendar.

This neighbor believes the Iowa caucuses are important. While I hope that the senator next door, Amy Klobuchar, finishes in the top four, regardless of outcome, the caucuses are valuable and should be retained.

Coastal elites often deride Iowa as a land of corn (and ethanol) and little else. While Iowa does rate second in the nation in agricultural cash receipts (California is first), only about 10 percent of Iowa residents live on farms, with about 60 percent in cities. The state has experienced great industrial growth in the last 20 years, and approximately 60 percent of Iowa’s workers are employed in service industries, not agriculture. Des Moines, the capital city, is a national center of the insurance industry (home to Principal Financial, for example).

What Iowa brings us is the opportunity to see each candidate up close and personal and to judge their organizational abilities. These are valuable skills for a president.

The basic political beef (pork?) about Iowa is that it is approximately 90 percent white and thus, it is argued, unrepresentative of the country. It was Iowa that validated the electoral appeal of Barack Obama when he defeated Hillary Clinton in the Iowa caucuses in 2008. Prior to that victory, political pundits questioned Obama’s electability, as though the country was not ready for an African American president. Had Obama only won the South Carolina primary, later in the process, these same pundits would have written off that outcome as the result of racial calculus. Iowa validated what the country later validated in the November election.

Modern presidential campaigns are primarily run via TV and are now social media events. The candidate spends most of his/her time being intimate with an inanimate object, no human exchange required. In Iowa, it is different: Retail politics, face-to-face, issue-by-issue, is how politics are practiced.

In the summer of 2011, I was sitting in a hotel bar in Dubuque as the local news featured a clip of Rep. Michele Bachmann at a gathering in Waterloo. She was congratulating the crowd on being in the birthplace of John Wayne. The bar crowd in Dubuque, amid laughter, knew who Bachmann was, and also knew that John Wayne was born in Winterset, not Boone. Not getting details correct—particularly details about Iowa—will be held against you.

Retail politics: Some politicians are good at it and some are not. Bachmann’s nascent efforts ended in Iowa, as did Tim Pawlenty’s. To win under the intense scrutiny of retail politics, a candidate has to be extraordinarily good at details and organizing a political ground operation. It turned out that candidates like Bachmann, Pawlenty, Sen. Kamala Harris, and many others could not do that.

What Iowa brings us is the opportunity to see each candidate up close and personal and to judge their organizational abilities. These are valuable skills for a president. Hearing the real concerns of people who live in the middle of our country is useful to the candidate and their staff, who might otherwise call Iowa “flyover country.”

But Iowa is not always predictive. The modern Democratic Presidential caucuses started in 1972, the GOP’s in 1976. According to a pre-2020 analysis by The Des Moines Register, there have been 18 winners among the two major parties—10 Democrats and 8 Republicans. Half of those went on to secure their party’s nomination, but only three went on to be elected president (Carter, Reagan, and Obama). In 2016, for example, Sen. Ted Cruz won Iowa, but Donald Trump went on to be nominated and win the presidency.

Iowa should keep its preeminent position as the first step in the presidential nominating process. The state is mainly urban, majority white, a plurality Protestant, with a broad-based economy, including manufacturing and agriculture—not unlike most of the U.S. Allowing the larger electorate to see how candidates fare in face-to-face politics requiring campaign discipline and organizational ability is important in determining how that candidate would function as a presidential candidate.

Iowa is not the last step in the process, it is the first. One state cannot be a microcosm of all states, all regions, and all political interests. That is why we have a nomination process that runs approximately seven months. Some state has to be first, and that state should be Iowa.

2020 Meetings and Events Resource Guide
The New Watchdog
Are Fines Dandy?
Are You Being Recorded?