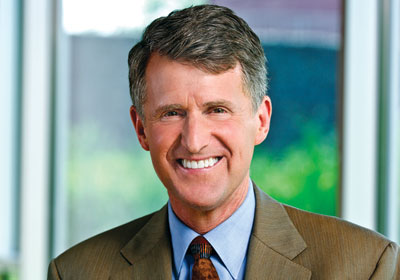 Former McKnight Foundation boss Rip Rapson says that Detroit has by no means been totaled.
By Gene Rebeck
May 05, 2013

A resident of Rapson’s former home state can’t help note that Detroit’s financial woes are so dreadful—a deficit of $327 million and a shrinking tax base (it’s lost a quarter of its population since 2000)—that in mid-March the State of Michigan named an emergency manager to put the city’s house in some semblance of order, without City Hall’s interference.

Rapson says that his upbringing, plus his public sector and foundation work in Minneapolis, informs his experience in Detroit in a number of ways. While Minneapolis has “a highly functioning public sector,” it still requires financial and other kinds of help from businesses and nonprofits. Detroit has seen “a deep decline in the ability of the public sector to get things done,” he says, and needs similar help.

Rapson also notes the Twin Cities’ economic diversification. “That’s not the way it is in Detroit,” he says, which has struggled “for such a long time” with the auto monoculture. Over the last few years, philanthropic and business organizations have sought to create a broader economic base.

Some examples of recent success Rapson offers include a total of 10,000 jobs added to downtown from Quicken Loans, Blue Cross Blue Shield, Chrysler, and others moving operations from the suburbs.

Kresge itself has given Detroit nearly half a billion dollars over the past two decades for arts and community development. The $150 million is part of a broader initiative called Detroit Future City, a long-term plan that seeks to boost neighborhood businesses and repurpose the city’s vast acreage of vacant land into parks, urban farms, and other uses.

Minneapolis, he says, provided him insights for helping build a “stable, long-term platform for returning a place like Detroit to vitality.” Here’s wishing Rapson and his adopted hometown happy motoring.