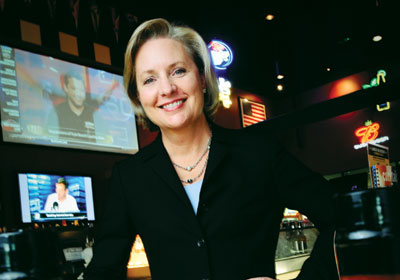 During a shareholder meeting, the long-time executive said she would retire before the end of 2017.
June 02, 2017

Sally Smith, who has led Buffalo Wild Wings as its chief executive for more than two decades, announced on Friday that she would retire from the restaurant chain “before the end of the year.”

“Sally has delivered countless contributions to Buffalo Wild Wings for more than two decades and much of our success to date is directly attributed to her leadership,” said Jerry R. Rose, chairman of the Buffalo Wild Wings board, in a statement.

Executives at the company have faced backlash from an activist investor throughout 2017. Marcato Capital Management had criticized Buffalo Wild Wings for its current model, which exists of about half company-owned locations and half franchised. Marcato, led by principal Mick McGuire, suggested the chain sell 80 percent of its company-owned restaurants to franchisees on top of reorganizing its board and C-suite.

Smith’s retirement announcement came on the day of a company shareholder meeting in which investors were asked to vote on the company’s future leadership.

“I am proud of Buffalo Wild Wings’ tremendous success,” said Smith in a statement. “I will focus on leading Buffalo Wild Wings and driving value-creating change until we are ready to make a smooth transition. I am confident that the company, including its excellent management and Board, are solidly positioned for its next phase of growth and development. I would like to thank the entire team at the home office, in the field and in the restaurants, as well as all of our franchisees, for their hard work and commitment over our more than 20 year history together and look forward to watching the company’s next chapter of growth.”