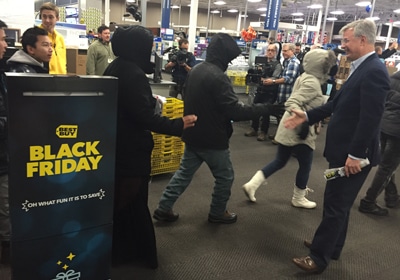 Minnesota businesses large and small, as well as the state’s shopping malls, said the holiday sales weekend following Thanksgiving was one of the best on record.

The Mall of America had an estimated 250,000 shoppers pass through its doors on Black Friday—the Bloomington mall’s highest-ever single-day draw. “We had a line of about 1,500 guests all the way out to IKEA,” mall officials said. “Traffic was significantly up Saturday and Sunday as well.”

Two of the state’s largest retailers reported a surge of shoppers hungry for holiday savings as well.

Minneapolis-based Target said its in-store sales were strong on Black Friday, and the discount retailer’s website experienced its biggest day ever with double-digit growth in sales compared to the same time a year ago. More than 3,200 TVs were sold every minute in the first hour of Black Friday, Target said, making it the retailer’s top-selling category. Other hits were video games (half a million video games sold in the first hour) and wearables (50 percent sales increase).

An estimated 154 million consumers in the U.S. shopped on Black Friday, the National Retail Federation (NRF) reported. That’s up from 151 million last year.

Average spending was down, however, from $299.60 in 2015 to $289.19 this year. Just over half of shoppers around the country bought items at department stores (51 percent), according to the NRF, followed discount stores (34 percent), electronics stores (32 percent), clothing or accessories stores (28 percent), and grocery stores (25 percent).

Despite the NRF finding that only 12 percent of shoppers shopped at small businesses on Black Friday, local shops faired even better the following day on Small Business Saturday.

An estimated 112 million consumers shopped at small businesses the day after Black Friday, according to an American Express report. Altogether, in-store traffic at local shops was up 13 percent from the year prior.

Similar to findings at big box retailers, overall spending was also down at small business locations. About $15.4 billion was spent at independent retailers and restaurants across the country on Small Business Saturday, American Express said, which is an $800 million decrease from last year.

Nevertheless, Minnesota businesses such as Bloomington-based Wixon Jewelers report that the holiday shopping weekend turned out even better than expected.

“We definitely had more traffic, more sales and higher sales,” said Dan Wixon, owner of the jewelry retailer. “Thanksgiving weekend is typically not relevant because we’re a high-end store, not a Black Friday store.”

Both customer traffic and sales at Wixon Jewelers were up 40 percent from Friday to Sunday, which Wixon said gives him a “very positive outlook” heading into the crucial month of December.

“I think the climate got better just because the election is over,” Wixon said of why shoppers turned out in atypical fashion. “I’m not saying it’s because of who won, but with the election over it creates an air of positivity and eliminates a lot of uncertainty. And that makes a lot of difference for people buying at our level.”

“Plenty of our local businesses do e-commerce as well, and many can match online retailers dollar-for-dollar,” Hamel said. “A lot of people don’t realize that [Minneapolis bookstore] Magers & Quinn, for example, will price match Amazon on any book purchase. So it’s important for people to know they have the option to spend that money locally, instead.”