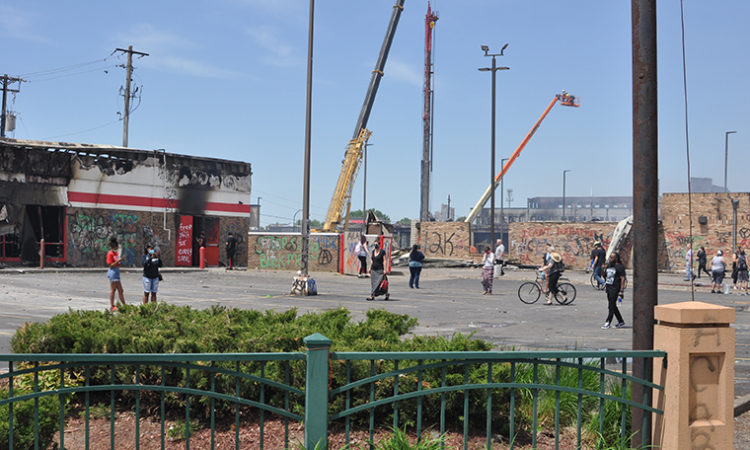 Several stores remained boarded up on Monday, while some adjusted operating hours.
By Dan Niepow
June 01, 2020

In the wake of continued unrest following the death of George Floyd last week, Twin Cities retailers on Monday scrambled to adjust operations or close up shop entirely. Aside from a state-imposed 10 p.m. curfew planned for Monday and Tuesday, businesses had little guidance from government leaders on how to safely reopen.

When asked about reopening plans during a Monday morning press conference, Gov. Tim Walz said he wouldn’t “encourage someone to go into an unsafe situation.”

“It doesn’t mean you have to open. It means you adjust,” he said. Bars and restaurants had been given the OK to reopen for outdoor dining starting Monday, but several have pushed back reopening plans after last week’s protests.

As for financial aid for businesses damaged during the protests? The governor said the state legislators would likely take that up when they reconvene on June 12.

Meanwhile, Minneapolis-based Target, which on Sunday told The New York Times that about 200 stores would be closed, has reopened several locations across the country, though hours have been shortened for many. As of Monday evening, Target’s stores in Uptown Minneapolis, Northeast Minneapolis, and St. Paul Midway remained closed. The retailer’s store on Lake Street—the epicenter of mass looting last week and just a few blocks away from the spot where Floyd died in police custody—sustained significant damage and will remain closed.

Target has said it aims to reopen the Lake Street location later this year. It’s not yet clear if or when the nearby Cub grocery store or Aldi will reopen.

Elsewhere in south Minneapolis, stores were cautiously preparing to reopen. The Seward Community Coop on Franklin was shuttered on Monday, but plans to reopen on Tuesday. Ditto for the coop’s other store on 38th Street.

In the North Loop, men’s retailer MartinPatrick3 shut down at 2 p.m. on Monday, with plans to stay closed through Thursday. And over in St. Paul, there have been mixed reactions. Dan Marshall, owner of the Mischief Toy Store, said he had planned to reopen his store on Monday but has reversed course. Now, the reopening will be delayed “for a while,” he said in an email.

“About 75 percent of businesses on Grand are boarded up, and I’m not sure when they plan to reopen,” Marshall said in an email. “We spent the night at the store the past 2 nights. We are still taking phone and internet orders but those have slowed considerably the past week. The best we can do is work on projects around the store and we’ve kept busy doing that.”

He added: “I don’t know how soon Grand Ave will be properly back to business. We’re hoping that all this pain and destruction can at least lead to meaningful change.”

Target and other larger chains have shared similar sentiments.

“We are a community in pain,” Target chairman and CEO Brian Cornell said in an open letter. “That pain is not unique to the Twin Cities—it extends across America. The murder of George Floyd has unleashed the pent-up pain of years, as have the killings of Ahmaud Arbery and Breonna Taylor. We say their names and hold a too-long list of others in our hearts. As a Target team, we’ve huddled, we’ve consoled, we’ve witnessed horrific scenes similar to what’s playing out now and wept that not enough is changing. And as a team we’ve vowed to face pain with purpose.”