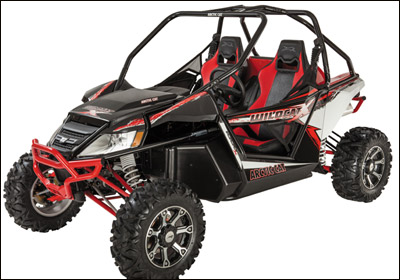 The recreational vehicle company announced that its third-quarter profits fell 32 percent and it is lowering its full-year earnings guidance for 2014.
By TCB Staff
February 02, 2014

Arctic Cat’s stock price fell about 15 percent Thursday after the company announced that its third-quarter profits were well-below analysts’ expectations.

The Thief River Falls-based recreational vehicle company announced that net earnings for the third quarter, which ended December 31, totaled $12.1 million, or $0.89 per share, down 32 percent from $17.9 million, or $1.30 per share, during the same period in 2012. Earnings per share were $0.43 lower than what analysts polled by Thomson Reuters had expected.

“As we stated last quarter, we expected the second half of our fiscal year to be challenging,” Chairman and CEO Claude Jordan said in a statement. “Profitability in the 2014 third quarter was reduced, chiefly due to anticipated lower gross margins on snowmobile models built for Yamaha, as part of our new partnership this year, and ATV product mix.”

The company said it began shipping some of its new Wildcat Trail models in December but most of its orders will be filled in the fourth quarter. The new model features a narrower 50-inch-wide platform, which Arctic Cat said makes it an attractive and versatile option for consumers.

Medina-based competitor Polaris is also in the process of debuting a new off-road vehicle, called the Sportsman Ace. According to Polaris, its new vehicle combines the size (a 48-inch-wide platform) and handling of its ATVs with the comfort of its side-by-sides—click here to read more.

Thursday wasn’t the only time in recent months that Arctic Cat’s stock has taken a hit. It is now down more than 20 percent from three months ago. It was trading at $46.30 per share Thursday afternoon.