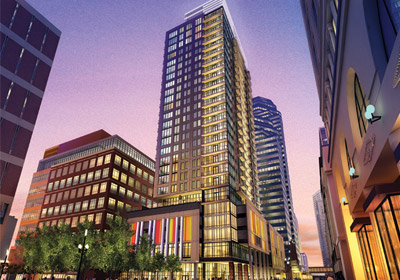 The downtown Minneapolis vacancy rate ticked up while more large projects are in the pipeline.
May 24, 2014

The vacancy rate for apartments in downtown Minneapolis has more than doubled in the last year amid the local building boom for rental projects.

The rate is also higher than it was at the end of last year. Marquette Advisors reported a vacancy rate of 4 percent for downtown Minneapolis at the end of 2013, in its fourth-quarter “Apartment Trends” report.

Downtown Minneapolis has been ground zero for developers to build high-end, new apartment projects in the urban core. Part of the boom has been driven by demographic changes and the uncertainty of the housing market. But some market watchers, noting that there is not an endless supply of people to rent expensive units, have noted that the building trend can’t last forever.

The average apartment rent in the Twin Cities is now $1,000 per month, up 3.5 percent from a year ago.

In downtown Minneapolis, vacancy is expected to increase further. The Marquette Advisors report noted: “The influx of new product has created a competitive market within the luxury segment. . . .Demand fundamentals remain strong and the submarket continues to meet our expectations in terms of absorption, although a more pronounced adjustment in vacancy is likely over the next several months as another 1,300-plus units are expected to open here during 2014.”

Big projects slated to open in downtown Minneapolis this year include the 354-unit LPM Apartments near Loring Park at the edge of downtown and The Nic on Fifth, a 253-unit project in the heart of downtown. Both are luxury rental towers.

There are several more projects in the pipeline in downtown Minneapolis.

Construction recently began on Latitude 45, a 319-unit project. Plans on the drawing board include 4Marq, another tower that will offer 262 units. The Downtown East redevelopment plan currently calls for 193 apartments.

According to the numbers from Marquette Advisors, apartment rents in downtown Minneapolis now average $1,398 per month, or 40 percent higher than the average metro-area rental rates.