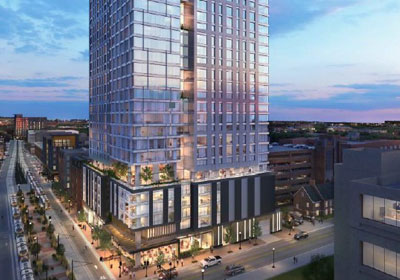 Apartment Tower On U Of M Campus Now Under Construction

The latest student housing development at the University of Minnesota would not be out of place in downtown Minneapolis. Plans for The Hub Minneapolis include 430 units with 707 beds in a 26-story tower. The total project cost of the development is $97.9 million.  Construction is underway; the project is slated for completion in the summer of 2018.

The project is a joint venture between Memphis-based Education Realty Trust Inc. (EdR), Chicago-based Core Spaces and Harbor Bay Real Estate Advisors LLC, which has offices in Minneapolis and Chicago.

EdR’s involvement in the project had not previously been disclosed. The Hub Minneapolis name for the project is also new. The publicly traded real estate investment trust (REIT) will own 51 percent of the project and will manage the property once complete. EdR describes itself as “one of America's largest owners, developers and managers of collegiate housing.”

“We have that previous relationship with Core Spaces from our partnerships in Madison and Tucson,” said Craig Wack, a spokesman for EdR. “The site is obviously important. One of our major development criteria is to be within pedestrian distance to campus.”

The new project will stand at 600 Washington Avenue SE in Minneapolis, a site once home to long-standing campus eateries the Village Wok, the Big 10 and other retail. Given all of the on-campus development in recent years, finding good sites is getting tougher.

“It was the last obvious undeveloped site at the University of Minnesota on that side of the campus,” said Tom Lund, co-founder and partner with Harbor Bay Real Estate Advisors.

Lund noted that the site is just a few steps from the East Bank light rail transit station, which he said is a big plus for the project. “It’s just an amazing location.”

While some observers might wonder how many more units of student housing the campus can support, Lund and others see plenty of demand.

Minneapolis-based CPM Companies has been a prolific developer of new student apartments near the University of Minnesota in recent years: “We are 100 percent full in all of our properties,” said Dan Oberpriller, co-founder and principal at CPM.