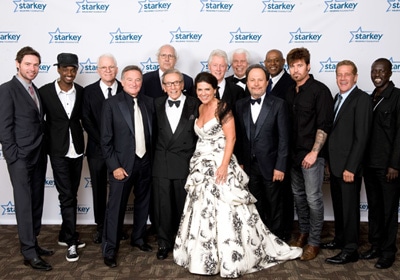 Nearly 1,500 people were present at the Saint Paul River Centre on Saturday for the Starkey Hearing Foundation’s “So the World May Hear” gala.

The annual event raised a record $7.6 million, topping last year’s $7.2 million, despite a modest decline in the number of attendees.

The money was raised through ticket sales, sponsorships, donations, and both live and silent auctions. It will help fund the Eden Prairie-based foundation’s hearing missions, as well as its “Listen Carefully” program, which aims to encourage young people to use safe listening practices.

According to the foundation, hearing loss affects 36 million children worldwide. Since its inception in 1984, the foundation has provided hearing aids to those without access, and it currently fits and distributes more than 100,000 hearing aids each year. The organization has pledged to fit 1 million hearing aids this decade, while also promoting hearing health awareness and education.

Performers included Steve Martin, Billy Ray Cyrus, and Glenn Frey, who also donated an autographed guitar. The guitar sold for $130,000 during the event’s live auction, which was led by Robin Williams and Billy Crystal.

Sister Rosemary Nyirumbe, who runs St. Monica’s School in Uganda, and actress Maria Bello, who was recognized for her work in Haiti, were both honored at the event.

The night also included video footage of hearing missions in El Salvador and the Dominican Republic, and Starkey’s Executive Director Steven Swalich announced the production of a new documentary series, “Operation Change,” which will document the foundation’s missions.