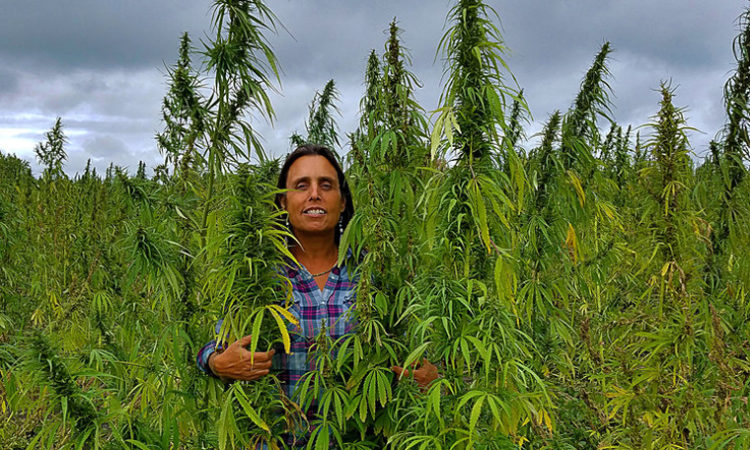 After a successful fundraising campaign, Winona LaDuke is readying her company for wide-scale hemp production, which will be used to make clothing, dietary oils and construction products.
By Gene Rebeck
February 26, 2018

“Minnesota used to grow its own clothing,” said northern Minnesota-based Anishinaabe economist, author and environmental activist Winona LaDuke regarding her latest effort to bring the state back to its roots.

Two years ago, LaDuke began planting hemp on acreage she owns near the White Earth Reservation, located a little over an hour’s drive west of Bemidji. And last year, the company she founded, Winona’s Hemp and Heritage Farm, earned $132,337 in pledges from a Kickstarter campaign. (Her goal was $100,000.) By exceeding her goal, LaDuke was able to purchase a 40-acre farm near the White Earth Reservation for cultivating industrial hemp, which historically has been used in numerous applications, including garments.

“We globalized our economy and shifted our manufacturing overseas,” LaDuke told TCB. “We need to reindustrialize—appropriately.”

The benefits of hemp production, which is much less toxic and water-intensive than cotton or petroleum-based fibers, has a powerful appeal for LaDuke, whose recent points of activism have focused on halting the Dakota Access oil pipeline at the Standing Rock Reservation in the Dakotas. The earthly benefits of her company’s hemp products, she said, is something that has growing appeal with American consumers.

This year, LaDuke plans to plant 20 acres of hemp in a number of locations in the White Earth area. She’s trying different varieties to determine which might be the best producers.

At its peak, Minnesota once had 11 hemp mills, LaDuke said. As in other states, the industrial hemp industry collapsed in the ‘60s and '70s as the federal government cracked down on marijuana, a close botanical relative frequently confused with industrial hemp.

But the times have been changing. More than 33 states, including Minnesota, have legalized such cultivation, though with varying degrees of regulations. The 2014 federal farm bill further loosened the restrictions on industrial hemp production. According to advocacy group Vote Hemp, more than 23,000 acres were grown in 19 U.S. states last year.

LaDuke—and other Minnesota hemp farmers, which numbered 26 as of last year—are growing their crop under the watchful eye of the Minnesota Department of Agriculture. “The state monitors me,” she said. “The state had to approve my seeds. And they check my crop for THC,” the chemical in marijuana that induces the high. Industrial hemp has only trace amounts of THC (or should).

LaDuke has operated a farm for the past two decades, where she’s grown squash and other traditional Anishinaabe crops, using horses to power her plows. And as an activist, she’s also been something of an entrepreneur. In 1989, she founded the White Earth Land Recovery Project (WELRP), which buys land on the reservation owned by non-natives. WELRP also has reforested tribal lands, markets wild rice harvested by tribal members and developed enterprises selling traditional Anishinaabe foods like hominy and buffalo sausage.

The White Earth Anishinaabe band also has been cultivating hemp with the goal of marketable production. It’s an industry that LaDuke would like other Native peoples to pursue. Come this week, on March 1, Winona’s Hemp and Heritage Farm, along with the Anishinaabe Agricultural Institute, is conducting a conference on the White Earth Reservation, north of Detroit Lakes. The conference will teach attendees about the opportunities that hemp production could offer their communities.

As for LaDuke, she hopes to start selling her own crop in two to three years, once she has determined the right varieties to plant and her farm is certified organic. She also has another large entrepreneurial vision: a processing mill in Northern Minnesota that can process the state’s hemp crop into products.

“My goal is to buy organic hemp from a number of local producers,” LaDuke said. “I want to go from the seed to the garment.”

She’s interested not only in clothing, but also the hurds, the woody inner portion of the hemp stalk. Hurds can be used in paper making and construction products including particle board and “hempcrete.” Another product, one that is already available in some states, is cannabidiol (CBD) hemp oil, used primarily as a dietary supplement.

LaDuke has begun work on a feasibility study for such a mill, which she’d like to have up and running by 2022. Notably, she and her partners wouldn’t be the first new hemp mill in the U.S. Last year, a company called Hemp Inc. opened a 70,000-square-foot processing facility in North Carolina.

For the past few decades, advocates have conjured visions of hemp as a kind of miracle crop. So far, LaDuke has been staying grounded, building a market as well as a vision.

“It represents the next economy,” LaDuke said of hemp production. “On a worldwide scale, and particularly in North America, increasing numbers of people are buying organic. I’m interested in having my community be part of the organic industry. Hemp is definitely a crop of the future—and it’s been grown for 10,000 years.”