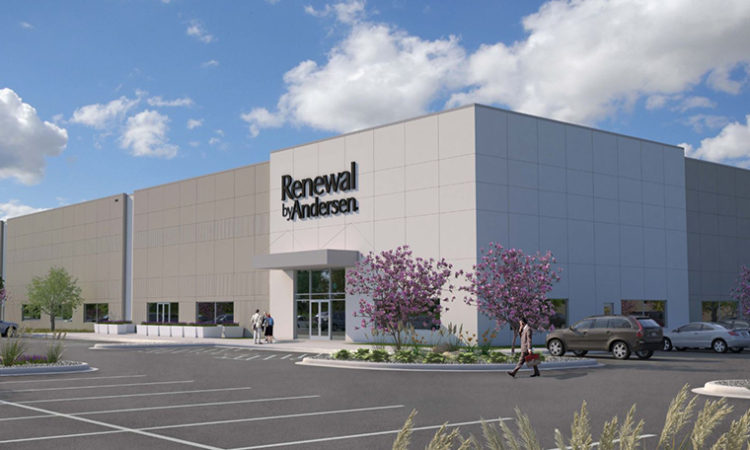 This week, the company broke ground on a $35 million expansion of its Renewal by Andersen campus in Cottage Grove.
By Dan Niepow
July 23, 2019

The new 350,000-square-foot expansion will be just across the road from the existing facility at 9900 Jamaica Avenue South, says Paul Delahunt, president of Renewal by Andersen. The current facility is about 370,000 square feet.

Andersen will ship window materials to the new facility from its shop in North Branch, Minnesota. Then, the company will prep the materials for final assembly at its main manufacturing plant across the street.

Andersen has been using an outside company to warehouse the materials prior to assembly, but that will change when the expansion is completed, Delahunt says.

“Today, we have kind of a convoluted supply chain,” he says. “The main purpose of this is really about streamlining our supply chain.”

The company tapped Minnetonka-based Opus Development Co. to build the new facility. Delahunt expects the new facility to be finished by about July or August of next year.

Renewal by Andersen aims to hire at least 125 new workers at the new facility. If the company makes good on its hiring promise, it could get some state assistance – to the tune of around $387,000.

Andersen also qualifies for a capital investment rebate of $413,000, along with $450,000 through the Minnesota Investment Fund loan program. All told, the company could net $1.25 million in state assistance for the expansion.

Renewal by Andersen currently employs around 2,000 people, according to Delahunt.

The expansion was prompted by “strong customer demand,” Delahunt says.

It won’t be Andersen’s first expansion in Cottage Grove: In 2016, the company completed another expansion of its renewal facility in the Twin Cities suburb.