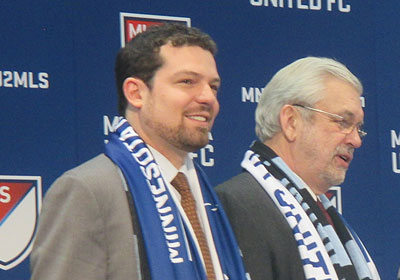 “When we sit down with policy makers and cut through the noise, most people are supportive,” says Minnesota United President Nick Rogers.
June 05, 2015

The multipurpose room at the Powderhorn Park Community Center was about half filled for a panel discussion on the proposed stadium that would bring a Major League Soccer team to the Twin Cities.

All the attendees seemed to be fans — at least none denied their affection for the sport. But there was a dividing line that separated them. There were the supporters of the lower-level Minnesota United team that could advance to MLS, many of whom appear willing to support a public financial role in the stadium deal. And then there were fans and players affiliated with Left Wing TC, who like the idea of a top-level team but balk at any taxpayer help.

It wasn’t a debate exactly. Those who might identify with the Dark Clouds supporters group asked few questions and offered fewer opinions. They left that to Minnesota United President Nick Rogers.

Public push amid private talks
The event was sponsored by 9th Ward Minneapolis Council Member Alondra Cano, who had brought together Rogers; the deputy director of the city’s economic development, Chuck Lutz; and Emmanuel Ortiz, a founder of Left Wing TC, a local chapter of a national organization that describes itself on social media as a “leftist/progressive anti-imperialist” futbol club.

Cano said she gathered the group together to get information about the proposal and assess sentiments of the residents in her ward toward the proposal. But she expressed some frustration that there isn’t much for her to react to. Owners of the prospective team met with some members of the council beginning in late 2014 but not her. And she said the rumored terms from more recent meetings keep changing.

“What might have been happening on Monday wasn’t happening on Friday,” she said. The latest is that the Minnesota Legislature adjourned without taking any action on a soccer plan, which isn’t surprising since nothing was asked of it by team owners. The next day the Star Tribune reported that private talks between some council members — led by Council Member Jacob Frey — were coming up with ideas to broker an agreement.

The ownership group led by former United HealthCare CEO Bill McGuire has said it will pay the $100 million franchise fee to MLS, purchase land in the Minneapolis Farmers Market area for about $30 million and pay for construction of a $120 million soccer-specific stadium there. It is asking for no direct taxpayer contributions for stadium construction, unlike all other pro sports venues in the metro. The owners, however, want two tax breaks that have been awarded to other pro stadium projects — forgiveness of sales tax on construction and an ongoing exemption from property taxes.

The tax break request prompted the divide between those in the room Tuesday evening.  “Like many of you I’m a lifelong, passionate fan of soccer, both as a spectator sport and as a player,” said Ortiz, co-founder of Left Wing Twin Cities. “If there are two things that people in this country, in this world, can be passionate about it’s soccer and taxes.”

Despite being a fan who described himself as being excited by the franchise announcement, Ortiz said he couldn’t endorse any level of tax breaks for wealthy team owners when Left Wing players as well as youth players can’t find adequate fields and facilities in town. “How can we provide corporate welfare, at the tune of 3 to 4 million dollars, as a show of support for soccer, when we can’t fund a soccer field in Powderhorn Park?” he asked.

The tax forgiveness rationale
It wasn’t really a question that Rogers could answer to the satisfaction of Ortiz or others who agreed with him. Rogers tried anyway. His group wasn’t asking for anything other team owners haven’t asked for and received. And the soccer group was asking for a lot less — paying the full cost of the stadium and the land.

“We don’t have any stadium in the state that is subject to property taxes,” Rogers said. (Those stadiums and arenas are exempt, however, because they are owned by public entities and authorities. As of now, the soccer owners would also own the stadium, though McGuire has said he is open to putting it under something like the Minnesota Ballpark Authority, which owns Target Field.)

The owners need the tax forgiveness to make the franchise at least break even, Rogers said. And if no stadium is built at the market site, then there is no additional property tax revenue to be collected anyway. Team owners have also accepted a suggestion from Frey to continue to pay the current property taxes collected on the warehouses and light manufacturing buildings now on the property. That way, the city and other governments who benefit won’t see a net loss in property tax money.

Minnesota United officials have also supported Frey’s suggestion that an existing entertainment district sales tax be expanded to cover the new stadium, something that would boost city revenues.

“We haven’t taken a hard-line approach,” Rogers said of the team's proposal. “We’ve expressed an interest in talking.”

'Is there a community that wants us?'
Rogers complimented council members like Frey who are open to conversations, but criticized Mayor Betsy Hodges for rejecting the concept of public help — or even the idea of a separate soccer stadium.

“When we sit down with policymakers and cut through the noise, most people are supportive,” Rogers said.

But Ortiz and some others in attendance weren’t buying the argument that because soccer is asking for much less than football, baseball, hockey or basketball, it is OK. “It was a high-jacking,” Ortiz said of those deals. “I don’t demonize Mr. McGuire or the owning group. I’m glad they’re bringing soccer to Minnesota.”

Yes, it is unfortunate that their request is coming at the end, after all the other sports owners have asked for received large subsidies, Ortiz said. “We’re not against soccer. What we’re against, at least what I’m against, is the tax breaks for the wealthy.”

Rogers acknowledged that the team has “clearly a very wealthy ownership group.” Without the annual property tax savings, however, the owners don’t think the team would break even. “Just because people are wealthy doesn’t mean they want to lose money forever. All our owners will stay a lot richer if they don’t do this.”

Toward the end of the nearly two-hour forum, Rogers said something that hasn’t been said by the ownership group, revealing frustration with the process so far. “Minneapolis might say to us, ‘We don’t want you here,’” Rogers said. “And we’ll have to assess our options and figure out where is there a community that wants us.”

No one reacted to what sounds like the types of threats made by other teams owners in the midst of stadium battles. Unlike those threats, however, the McGuire group has the rights to an MLS franchise in the Twin Cities only, not other cities lobbying for teams like Sacramento, St. Louis, San Antonio and Las Vegas.

Cano said she is interested in seeing if there is a way to make something happen and is hoping to find out what the soccer team brings to the community, perhaps ending in something she called a Community Benefits Agreement. She said she’d rather be part of the conversation than reject it out of hand as some on the council have done.

“I think we can figure out a way forward that is a win-win situation,” Cano said. “I’m of the pragmatic mind that you’re either on the table getting chopped up or you’re at the table figuring out how this deal is going to look.”