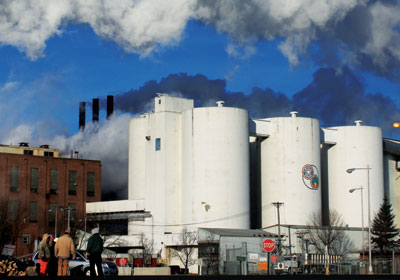 Despite escalating costs for all concerned, American Crystal Sugar is operating without 1,300 unionized factory workers locked out six months ago. Upping the ante, the union threatens to pull support for the Farm Bill, which in turn could hurt the entire sugar industry.
By TCB Staff
February 01, 2012

It’s been six costly months since matters suddenly soured in what otherwise had been a sweet coexistence between factory workers, management, and the farmer-owners of Moorhead-based American Crystal Sugar Company. And the angst amongst all parties involved is becoming as palpable as the sugarbeets they make their living from as America’s largest beet-sugar producer. Approximately 1,300 factory workers remain locked out, and as of press time, there was no sign of renewed efforts to replace the contract that expired July 31.

The situation epitomizes perhaps better than any other nationwide both the issue of the 99 percent versus the 1 percent, with middle-class workers kicked out by a CEO who made $2.4 million last year; and the issue of union obsolescence, where tradition and stubbornness led workers to reject a contract offer many Americans would gladly accept.

An agreement will ultimately be reached. But the ordeal will leave emotional and financial scars on hundreds of families and businesses throughout the Red River Valley, where the cooperative operates five factories and is estimated to contribute more than $1 billion annually to the economy. It also will have forever changed the reputation of the area’s largest employer.

In essence, Crystal Sugar is the head of a greater family consisting of thousands of factory workers and their
sugarbeet-farming relatives scattered among dozens of small communities in northwestern Minnesota and eastern North Dakota. Just about every factory worker is related to a grower, and on both sides of the beet are multiple generations of invested families. The company’s executives valued those relationships beyond mere dollars and cents, and the resulting unity generated consistent prosperity for Crystal Sugar’s shareholders.

But that history was washed away like topsoil in a Red River flood last August 1, when after only three months of loose contract negotiations, the company’s current executive team locked out its 1,300 factory workers. That act disrupted the communities and families where growers and factory workers coexist. And adding insult to injury, Crystal Sugar President and CEO David Berg later publicly described the labor contract as something that needed to be treated like one treats a cancerous tumor. (See “Treating the Disease,” at the end of this article.)

Through the holidays and into January, Crystal Sugar factory workers—particularly those in North Dakota, where unemployment compensation is unavailable for locked-out workers—continued to deplete their savings and retirement accounts, ask for loan extensions from bankers, and lean on food pantries, donations, and family and friends to make ends meet. Six months of unemployment in an area offering few job opportunities is hitting home for dozens of families unable to buy groceries and heating oil, according to local business leaders. Some Crystal Sugar workers are expected to lose their homes after months of patience by hometown bankers.

It’s particularly difficult in Drayton, North Dakota, where Crystal Sugar’s factory employed at least 100 of the town’s 800 residents (and about 100 from surrounding towns), and the nearest city of any significant size is Grand Forks, 50 miles to the south.

“We were able to extend credit for a few last fall,” says Peter Anderson, president of Koda Bank in Drayton. “Through harvest, a lot of them found part-time jobs, and a few, full-time. So there were no serious issues on the housing front” in December.

Most homeowners with first mortgages through Koda have been able to keep up, but in six cases, the bank extended mortgages a month or two to help out late last year. Others had personal loans extended. Anderson says the bank cannot continue those extensions much further. “In the next three or four weeks, it’s going to become more telling,” he says.

Helping those hardest hit by the lockout on both sides of the border have been at least a half dozen networks organizing food and Christmas toy drives. Donations have come in from Duluth west through the Iron Range, numerous times from the Twin Cities, and also from fellow union factories in other locations around the Midwest. Typically, food arrives in Grand Forks and then is shipped to food pantries in the other factory locations.

“We’ve had probably 200 families come in here and grab stuff, and probably 100 of them have been unable to get groceries otherwise,” says Nathan Rahm, a Crystal Sugar union representative at its Hillsboro food pantry.

Even with the economic hardship, “everyone’s standing firm,” says Laura Saastad, a single mother of three who has worked at the Hillsboro Crystal Sugar factory for four and a half years.

“My savings have pretty much been depleted,” she says. “But I’ve also found part-time, temporary jobs through family and friends.”

Bruce Jacobson in Hillsboro, who’s been with Crystal Sugar for 23 years, says he’s getting by because his wife is still employed. Many of the picketers TCB visited in December at factory locations in Crookston, Drayton, East Grand Forks, and Hillsboro also had spouses who were able to keep at least some income coming in.

Several also said they knew of people who tried in earnest to find a new job, but met apprehension from potential new employers: “Employers don’t want to hire us for fear we’ll quit when we’re called back to Crystal Sugar,” Saastad says. Others have retired, and a few from each community have left town in search of employment, health insurance, or both.

On a blustery 5-degree December morning, standing in front of wood stoves or fire pits, picketers at four Crystal Sugar locations were asked why they voted down what to outsiders seemed like a very good contract. It offered a guaranteed pay raise each of the next five years, health care coverage, contributions to a pension fund, and more. Their answers were similar: Too much of the contract had been reworded in ways that left them feeling they would lack job security.

In several instances, what was once promised by the company is now only a possibility, Saastad says. Also troubling to her and other picketers is language that says employees will be called back if they are considered eligible by management to return. Before, contract language clearly covered who would be called back and how. Adding “eligible” without defining it, either on paper or to the union, left most thinking that management would use callback as an opportunity to cull unwanted workers. “As a single mom, that made me worry I could be deemed ineligible to work,” Saastad says. (See “Too Much to Process?” at the end of this article.)

The Crystal Sugar workers at each factory gate said that they could continue to hold out and believed most of their peers could, too. With what seems a bit of irony, they added that they didn’t think the company could hold out much longer.

The Price of Profits 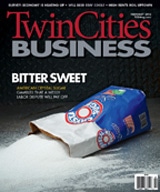 Crystal Sugar does anticipate taking a financial hit, and it has warned its farmer-shareholders of that expectation all along.

To fill the factories with temporary replacement workers, management hired Strom Engineering Corporation of Minnetonka, which specializes in providing labor for companies experiencing strikes or lockouts. Crystal Sugar is paying an undisclosed number of temporary workers salaries estimated to be as high as $1,800 a week, plus per diems of as much as $80. (The company would not confirm or deny these estimates.) It’s also paying to house them in area hotels and transport them to and from its processing plants in passenger vans every day.

While the replacement workers keep beet processing going, observers believe it’s at a much slower rate than what the company needs in order to process all of its crop in time—and to the quality levels required by customers.

“We’re used to seeing the smokestacks belch out steam on cold winter mornings like this one, and some days we don’t see it,” says Gary Johnson, pastor of United Methodist Church in Drayton. “When you see both stacks belching, you know it’s at full production; when only one is belching, you know they’re down a bit.”

Workers picketing outside the company’s East Grand Forks factory are almost gleeful when pointing to several yards of “remelt” stacked up just inside the gate. Remelt refers to sugar that wasn’t processed well enough to meet customer specifications. It’s eventually added back into processing, but slowly; it involves additional time and effort.

The company won’t comment on production levels, other than to say that it is pleased with the efficiency and quality of work its temporary workers are providing.

Meanwhile, there’s the U.S. Farm Bill to consider. Crystal Sugar and other sugar producers are asking Congress to extend a federal sugar program that restricts imports and, in years like 2010–2011, helps to drive up sugar prices—and costs to consumers and businesses purchasing sugar.

Historically, organized labor has helped companies such as Crystal Sugar lobby Congress to continue the sugar program, according to John Riskey, president of the Bakery, Confectionery, Tobacco Workers, and Grain Millers (BCTGM) AFL-CIO Local 167G, which represents most of Crystal Sugar’s processing-plant and storage-facility employees. Factory workers often lobby alongside farmers to help woo urban Democrats who may not care all that much about ag policy, but are passionate about maintaining good-paying, middle-class jobs in the heartland.

As long as the lockout continues, unions will not help lobby for the farm bill this year, Riskey says, adding that the national AFL-CIO and national BCTGM notified Crystal Sugar of this.

The company wouldn’t say whether it received such notices. “It would be disappointing if the union representing our employees wouldn’t support a farm bill that would help support their jobs into the future,” says Brian Ingulsrud, Crystal Sugar’s vice president of administration. “It seems illogical that a union would take that stance.”

Regardless, any costs associated with the lockout are worth it for the greater good of Crystal Sugar, according to President David Berg. “When all this stuff hits the fan, it’s because it’s the right thing for the company long term. It is expensive. We are investing a lot of your money so you will be more profitable in the future,” he said at a growers meeting in Grafton, North Dakota, on November 7. “Specific information has to remain confidential,” he told them, so that the union would not find out.

“The company keeps saying it doesn’t want to say how much this is costing because it doesn’t want the union to find out. Like what difference does it make to us?” says Sie Rawls, who’s been on the production line with Crystal Sugar in Drayton for 11 years. “It’s corporate keeping the farmers in the dark.”

“If the farmers found out how much they were spending, they would have a different opinion on all of this. And when you spend this much money, how are you going to get it back?” says Brady Evenson, a Drayton worker for just over a year before the lockout began.

Asked again to provide cost data in early January, Crystal Sugar declined to answer. But numbers should begin to surface soon: The company was expected to file its first-quarter financial statements with the Securities and Exchange Commission in mid-January, shortly after this story went to press.

Also as of press time, farmer-shareholders remained steadfast in their support for management.