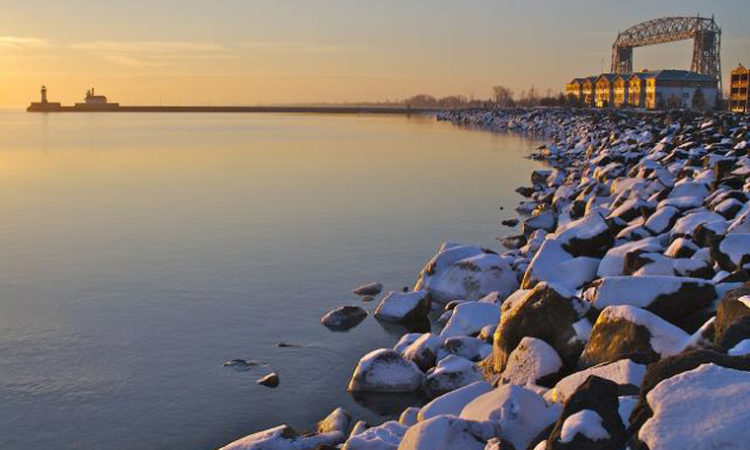 Duluthâs location on the western edge of Lake Superior has long defined its economy. ( Photo by Jim Brekke/Flickr/CC)

All MN Metro Areas’ GDPs Grew in the Past Two Years Except One: Duluth’s

Duluth’s economy is unique among Minnesota metro areas for its dependence on natural resources.
By Greta Kaul
November 30, 2017

Duluth is kind of having a moment. In recent years, it’s been named the best town in America (by Outside Magazine). The transformation of its Canal Park with shops and restaurants has helped revitalize its waterfront area. Tons of parks and trails make the Duluth area something of an outdoors mecca. And it’s home to some of the state’s destination breweries.

But not everything has been on the upswing for the Duluth metro area. Specifically, Duluth’s gross domestic product, a metric that looks at the total value of all the goods and services produced, used by economists to measure the health of an economy, is down.

That makes the Duluth metropolitan statistical area, which includes Carlton and St. Louis counties in Minnesota and Douglas County in Wisconsin, the only metro in Minnesota that has seen a decline in GDP for the last two years, according to data compiled by Minnesota Compass, a research division of the Amherst M. Wilder Foundation.

All the other metros — Moorhead, Grand Forks, Mankato, LaCrosse (which includes parts of Minnesota), the Twin Cities, Rochester and St. Cloud — have seen the value of goods and services produced by their economies make modest to moderate gains in the last couple years.

Duluth is the only metropolitan statistical area in Minnesota to see its gross domestic product decline in 2015 and 2016. For scale reasons, the Twin Cities metro was not included. 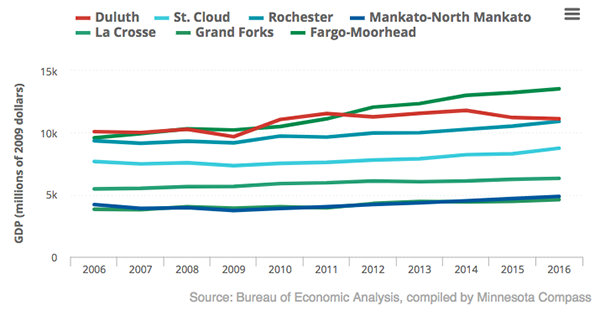 That might seem odd, given Duluth’s spiffed-up image. But it likely reflects some attributes unique to Duluth’s economy.

Located at the junction of the St. Louis River and Lake Superior, Duluth’s big economic driver has historically been its status as a hub for shipping natural resources, particularly iron ore, mined on Minnesota’s Iron Range and shipped across the Great Lakes.

More than other metro areas in Minnesota, natural resources — prone to booms and busts and vulnerable to international commodity prices — remain a driving force in Duluth’s economy.

While mining, for example, accounts for just  2.5 percent of jobs in the Duluth metro (about 3,150 jobs, per the Bureau of Labor Statistics), it accounts for about 11 percent of the area’s GDP.

And it’s not just the mining sector itself that’s dependent on iron ore.

“When they make those taconite [a form of iron ore] pellets … they come down by rail to the Duluth Harbor, their product goes through Duluth out on the Great Lakes over to the steel mills in places like Gary, Indiana, and Flint, Michigan,” said Heather Rand, director of business and economic development for the City of Duluth. “That’s a lot of product that keeps moving back and forth, and that’s a lot of jobs.”

But the mines have been closing, especially in recent years  as iron ore prices declined. Some of the jobs in professional services in the Duluth area, from finance to manufacturing of mining equipment, are also tied to administering natural resources, Rand said, making them vulnerable to that sector’s ups and downs. 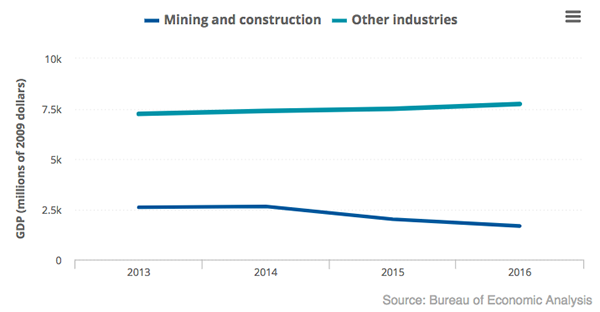 Today, education and health care is the biggest economic sector in Duluth in terms of GDP, at 16 percent. But again, where Duluth really stands out among major Minnesota metro areas is in its dependence on the mining sector.

In the Moorhead area, real estate, insurance and finance is the largest economic engine, making up 25 percent of GDP. In Rochester, education and health make up 38 percent of local GDP. And in the Twin Cities, 22 percent of GDP — the largest share of any industry — comes from finance, real estate and insurance, followed by 17 percent produced by professional and business services.

“Because of the sheer amount of the iron ore that’s going through and the tonnage of that, that’s something that makes the region unique. To have a natural resource that can boost (or drop) GDP like that,” said Erik White, the Minnesota Department of Employment and Economic Development's northeastern Minnesota regional analyst.

GDP contributions by arts, entertainment, recreation, accommodation and food services — the category that best captures recreation and tourism — have increased modestly in the last three years from about $419 million $433 million, though its share of GDP has remained relatively stable over time. Duluth is hoping to see gains here, between the appeal of the waterfront and some revitalization of neighborhoods.

“We’ve got a neighborhood just west of downtown called Lincoln Park that’s really taken off embracing the whole craft/artisan (aesthetic) as a district,” Rand said. That area’s seen gains in terms of resident and visitor traffic.

Duluth is seeing a real estate resurgence as well, with several new high-end apartment buildings built in the last few years, Rand said. Between 2015 and 2016, real estate and rental and leasing's GDP contribution increased from $625 million to $819 million.

And as the metro area’s economy changes to become more reliant on health care and education, its GDP could become more stable in the long-run.

Since 2001, health care, education and social assistance's GDP has increased from roughly $1.2 billion to $1.8 billion, increasing its share of GDP from 12 percent to 16 percent. And demand for health care is only likely to increase — northeastern Minnesota’s population is older, on average, than other parts of the state.

“The Northland economy is really one that’s shifting and changing, and moving away from mining, as important as mining still is in that area,” said Ellen Wolter, research scientist for Minnesota Compass. “It really is a shifting economy, and you’re probably going to see some fluctuation in the GDP as that economy changes.”