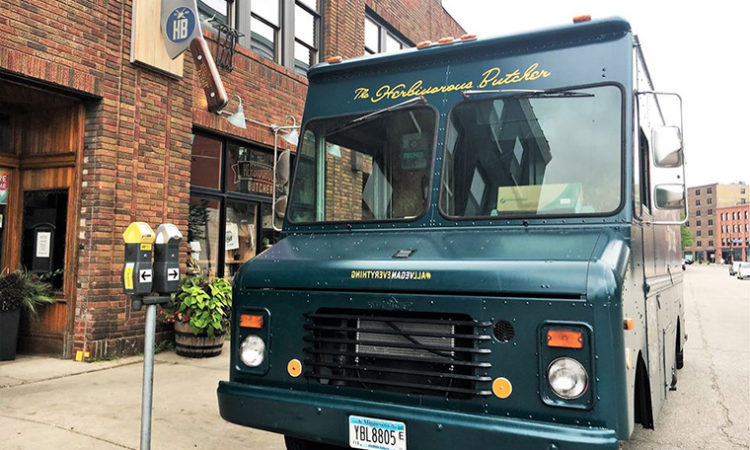 The Herbivorous Butcher operates out of a food truck and a brick-and-mortar shop in northeast Minneapolis.

The Herbivorous Butcher has entered a trademark battle with the food giant over use of the term 'vegan butcher.'
By Dan Niepow
November 19, 2019

When brother-and-sister duo Kale and Aubry Walch launched their meat-free “butcher shop” five years ago, they never expected they’d end up taking on one of the largest food companies in the world.

The two began selling their meatless meats at the Minneapolis farmers market in June 2014, and they called their venture the “Herbivorous Butcher.” They say it was the first “vegan butcher” shop in the country.

“We were kids then,” Aubry recalls. “When we first opened, we didn’t really know all the things you had to do after.”

Now, the Walches are embroiled in a trademark battle with Nestle over use of the term “vegan butcher.” The two had filed for a trademark back in 2017. The U.S. Patent and Trademark Office (USPTO) denied it, arguing that the term was “merely descriptive.” However, the office did approve the other trademarks the Walches submitted: “meat-free meats,” “sister butcher,” and “brother butcher.”

Kale and Aubry “administratively abandoned” the application for “vegan butcher” in July 2018. That means they didn’t respond to the trademark office’s objection, says Ken Kunkle of Kunkle Law PLC, which is representing the Walches on the case.

Then, Nestle subsidiary Sweet Earth filed an application six weeks afterwards, and the office approved it. The Walches then filed an objection.

It’s important to note: Both the Walches and Sweet Earth filed “intent to use” applications, meaning neither party formally claimed the term was already in use on their documents with the trademark office.

Still, the Walches say they’ve been using the term since they first formed in summer 2014. Sweet Earth, meanwhile, was established in 2011 by husband-and-wife team Kelly and Brian Swette. The company was acquired by Nestle USA in 2017.

“We coined the term when we first opened at the farmers market,” Aubry notes.

She concedes that there are now many vegan butcher shops in the market, and she says she “doesn’t have a problem” with the term being used elsewhere.

“But it’s when a big corporation steps in and tries to take something from all the small businesses that created the term,” Aubry says.

The case could take many months – or years – to resolve. It’s estimated that legal proceedings could stretch into 2021.