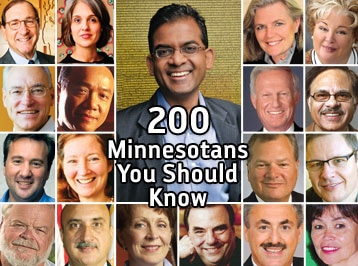 There are people you simply should know.

They are people who shape your world, whether you recognize it or not—people who come up in casual discussions, who frame points of view, whose very names form points of reference.

In our inaugural edition of “200 Minnesotans You Should Know,” you will find profiles of CEOs of Minnesota’s largest companies, public and private. You will find lenders, venture capitalists, and other financiers.

Even if you don’t know them personally, you should know who they are and what they do—assuming, of course, that your world is the business world, and that much of your business is done in Minnesota.

You will also see entrepreneurs, including individuals who have started several enterprises. There are builders—of buildings and businesses—and thought leaders, public influencers, and leaders of some of the not-for-profit enterprises that enrich your world. Leaders of law and accounting firms also appear.

Who won’t you find? Prince, the musician—even though it would be pitiable not to know his best productions. Twins catcher Joe Mauer, even though your life will be improved by watching him work. You won’t find Governor Tim Pawlenty, the novelist Vince Flynn, or the guy who played Scrooge last year at the Guthrie Theater. We are presenting a roster of people who occupy the business community. We left off professional athletes, actors, entertainers, writers, artists, and all but a few educators.

We also left out crooks—there’s no profile of Tom Petters—and elected officials, although we hope we don’t have to remind you that you should know the names of your representative in Congress, the mayor of the city in which you live, and your state senator and representative. We never considered including journalists.

Is 200 the right number of names? Well, sure it is. It highlights the fact that this is the 200th issue of Twin Cities Business. 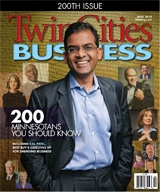 Click here to read about each of the 200 Minnesotans You Should Know in the digital edition of Twin Cities Business' April 2010 issue.