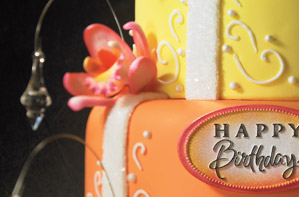 Sporting tattered jeans and lime-green athletic shoes, a grinning Duff Goldman eyes a corporate-looking crowd at the Walker Art Center. “I’m not in my comfort zone,” the Food Network’s Ace of Cakes tells the high-heeled, buttoned-down gathering. “I’ve never worked in an office.”

Where Goldman is comfortable is making cakes as large as Saint Bernards. He recently made an R2-D2 cake for filmmaker George Lucas.

Goldman owns Baltimore’s Charm City Cakes, and his TV show is just one expression (with cable series Cake Boss and Ultimate Cake Off, and blog and companion book Cake Wrecks) of the current mania for elaborate cakes. At a product launch party at the Walker this January evening, he is putting the icing on his alliance with a lesser-known giant in the cake business, Anoka-based DecoPac.

Goldman is endorsing “Duff” products for DecoPac, which calls itself the world’s largest maker of cake decorating supplies: tubes of gels, colored fondants, gum paste, and accessories. Like DecoPac’s other products, the Duff line will be sold wholesale to commercial bakeries.

Privately held DecoPac might have a low profile, but its predecessor business was a familiar one: McGlynn’s Bakery, which first opened a shop in Minneapolis in 1919. By the 1960s, McGlynn’s ran in-store supermarket bakeries and decorated cakes in front of customers. The McGlynns formed the DecoPac division in 1982, and it became the company’s only focus.

The launch party is heavy on DecoPac employees, but there are bakers there to meet their guru. Florence Wright, co-owner of Flor de lis Cupcakes in St. Paul, carries a chocolate cupcake topped with pink and red frosting swirled into a luxurious single rose. “She brought it to give to Duff,” says Marley McMillan, Wright’s business partner.

“I’ve always been a creative person, but I didn’t want to be a starving artist,” Rheingans says. Cakes will be more lucrative than canvas, she expects.

Goldman is oblique on that topic. He won’t say what his cakes sell for, explaining with a smile, “If people are buying a cake for more than $100,000, I have to sign a nondisclosure.”