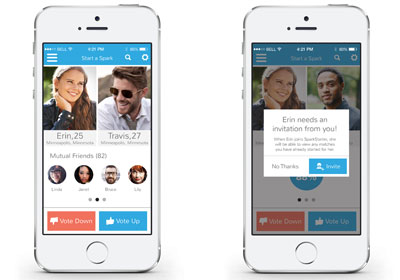 Woodbury Startup Wants You To Play Matchmaker With Facebook Friends

SparkStarter takes a slightly different tack from other dating apps like Tinder.
February 22, 2015

Interested in online dating, but need a little help from your friends? Or maybe you’re the type who likes to play matchmaker. Either way, you’re in luck.

SparkStarter, a Woodbury-based startup, recently launched iOS and Android apps to take on the likes of popular dating tools such as Tinder and OKCupid with its own twist.

Users download the app and connect their Facebook profiles to SparkStarter. Like Tinder, users can rate potential suitors with a match allowing the two to strike up a conversation and go from there.

But it’s the matchmaker function that sets the app apart—and has proven to be its most popular feature. Whereas those in relationships are generally not encouraged to use dating apps, SparkStarter entices those who are hitched to log on and rate potential relationships between their single friends.

“I truly believe in the age-old act of matchmaking, and want other people to have the same simple but digital opportunity with SparkStarter,” founder and CEO Tony Kramer said in a statement.

Kramer said he got the idea after meeting his wife by surfing through a friend’s Facebook connections.

SparkStarter launched privately in December, but has since been rolled out to the public. The company says it has 145,000 profiles with as many as 10,000 matches made each day.

The company was named a Minnesota Cup semifinalist last year.